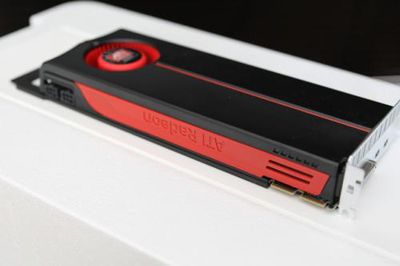 According to Barefeats, Apple's ATI Radeon HD 5870 Graphics Upgrade Kit ($449) for the Mac Pro does indeed work in the 2008 Mac Pro. This is despite the fact that Apple only officially lists the 2009 and 2010 Mac Pros as supported hardware for the upgrade card.

We plugged the Radeon HD 5870 into the 2008 Mac Pro. It works like a charm. Runs Portal faster than the 6-core Westmere. Details coming soon.

This gives existing 2008 Mac Pro owners another video card upgrade option from Apple. We had previously reported when the video cards had become available for purchase from Apple's online store. Barefeats has posted some preliminary results on the forums:

Here's an appetizer. I'm benchmarking Portal First Slice (which all my remote testers are using).

barefeats
I got the 5770 to support three displays by using one 30" Cinema on the DVI port, one 23" Cinema (with dual-link DVI to MDP adapter) on the first MDP, and one 24" LED Cinema direct to the second MDP.

Maybe one reason that all three lit up this time was the fact that the 30" Cinema is effectively an "active adapter" like the other two.

I'm continuing to experiment with every display combo on all models of Mac Pro with the 5770 and 5870 installed, so more to come on this.
Score: 1 Votes (Like | Disagree)

I took time out of benchmarking with one display to experiment with multiple displays using the newest GPUs. (Special thanks to "Pegasusrjf" for his input.)

With the Radeon HD 5870 installed in the 2008 Mac Pro,
I got three displays to light up and work with this setup:
1. 23" Cinema on the DVI port
2. 23" Cinema with MDP to dual-link DVI adapter on first MDP port
3. 24" LED Cinema with direct MDP connection to second MDP port

Who buys a Macpro to play video games :confused: LOL


I personally know a husband and wife (yes, he's a doctor/surgeon) who each bought 8-core Mac Pros primarily to play World of Warcraft (that and also to encode videos to watch on their iPads for trips to europe etc).

I'm hoping when he gets bored of the 8-core he'll sell it to me for a song but I'm not counting on it.
Score: 1 Votes (Like | Disagree)
Read All Comments