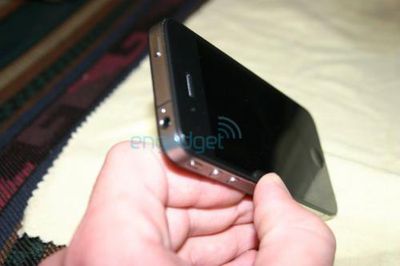 Engadget posts a couple of images purportedly of a prototype iPhone 4G. The backstory is quite sketchy, though the site does believe it may actually get some hands on time with the device.

Apparently the phone was found on the floor of a San Jose bar inside of an iPhone 3G case. Right now we don't have a ton of info on the device in question, but we can tell you that it apparently has a front facing camera (!), 80GB of storage (weird, right?), and isn't booting at this point (though it was previously, and running an OS that was decidedly new).

Perhaps adding credence to the images, however, are a similar but separate series of images posted to TwitPic last month. The original source of those images appear to have been a Chinese twitter user.

Another image of the back of the device. It is clearly labeled as an iPhone though many of the details are simply X-ed out.

One possibility that several forum members have mentioned is that it could be a Chinese knock-off phone designed to look similar to the iPhone.
Related Forum: iPhone
[ 630 comments ]


Sorry to beat a dead horse, but you are a complete idiot and a tool. You swore you wouldn't buy it and the 3Gs was better. FAILURE.
Score: 7 Votes (Like | Disagree)

winterlocked
After reading the reactions to todays rumored iPhone 5 leaked photos, I went back and read this old post about the iPhone 4 leak.

Sorry I'm bumping this. But you have to admit it's funny that so many people said its hidious and ugly, but mow there signature say "iPhone 4"

I hope not. That looks hideous!

looks like an ugly sony ericsson phone. The design is VERY un apple like, down to the seams and the buttons

going to go on a limb and say. no.

I hope they can boot this thing. Also more photos from the back and front!

Seams are pretty hideous. Apple made a big point of removing any seams that it could between the 2G and the 3G. This is a major step backwards if it has seams.

I don't think it's it purely because the volume buttons. Very unapple like.

All I can say is ew.

of course not. that thing looks like a peasant phone. what warbrain said.

A real phone, but not a real iPhone.

Chinese made POS attempt at a iphone

Doesn't fit apple design at all.

I would keep my 3GS over this ugly thing.

I don't buy this at all. The pics and details just don't up.

I wouldn't be surprised if this was a real prototype though.

hilarious...... although jake was right, it is a Chinese POS,
Score: 3 Votes (Like | Disagree)

looks like an ugly sony ericsson phone. The design is VERY un apple like, down to the seams and the buttons

going to go on a limb and say. no.


Merriam Webster should add a picture of these two posts for the word Troll lol :D
Score: 2 Votes (Like | Disagree)

newyorksole
lmao I thought I was the only one who liked looking at these old threads.

some of you are sooo contradictory.
Score: 2 Votes (Like | Disagree)

LoganT
For all who are saying this is ugly, realize this. It's probably the way the photos are taken.
Score: 2 Votes (Like | Disagree)
Read All Comments