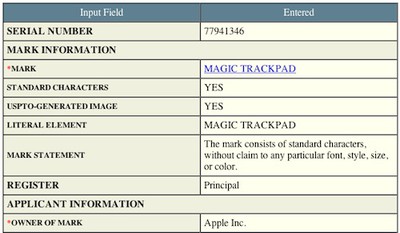 Patently Apple reports that the U.S. Patent and Trademark Office (PTO) today published a trademark application filed earlier this week by Apple covering the term "Magic Trackpad". The application requests registration in International Class 009 under a number of categories relating to computer hardware and software, as well as several types of peripheral devices.

There has been speculation about some sort of multi-touch "trackpad gadget" since John Gruber mentioned such a possibility ahead of an October product launch from Apple that saw the introduction of every one of his claimed products except the trackpad gadget. The speculation was further fed several months later with the revelation that Apple had filed for a trademark on the term "Magic Slate".

At the time, Apple had yet to introduce its much-rumored tablet device, and so speculation was consequently centered around that release. But with Apple filing this new trademark application a month after the tablet device was introduced as the iPad, it appears that Apple may yet have something more up its sleeve.

Thursday May 13, 2021 10:32 pm PDT by Sami Fathi
A new rumor suggests that Apple will announce the third-generation AirPods and the recently rumored HiFi, or high-fidelity Apple Music tier, on Tuesday, May 18, via a press release on its website. The new rumor comes from Apple YouTuber Luke Miani who shared the alleged exclusive news with the AppleTrack website. According to the YouTuber, Apple plans to release the next-generation AirPods...
Read Full Article • 148 comments

Thursday May 13, 2021 12:10 am PDT by Sami Fathi
Apple has fired Antonio García Martínez, an ex-Facebook product manager and author of the controversial book "Chaos Monkeys," following public and internal calls for removal and investigation due to past misogynistic statements, The Verge reports. Apple hired Martínez earlier this week to join its ads team, however, comments that Martínez made in the past sparked condemnation from users...
Read Full Article • 318 comments