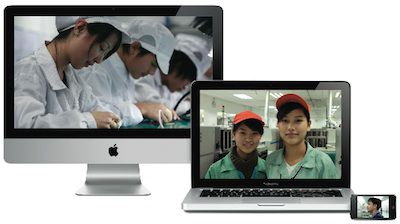 Apple yesterday began promoting on its home page the release of its annual Supplier Responsibility progress report, describing the company's commitment to responsible business practices on the part of its suppliers and other partners around the world.

Apple requires suppliers to commit to our comprehensive Supplier Code of Conduct as a condition of their contracts with us. We drive compliance with the Code through a rigorous monitoring program, including factory audits, corrective action plans, and verification measures.

Among the key highlights touted in the report is Apple's commitment to audits of its suppliers. The company reports having audited 102 facilities in 2009, up from only 39 just two years ago, and has trained over 133,000 workers, supervisors, and managers on such topics as workers' rights and management responsibility. Apple notes that representatives of most of the audited facilities have reported that Apple is the only company to have audited them regarding supplier responsibility.

According to the report, Apple in 2009 found a total of 17 instances of what it considers "core violations" of its code of conduct, representing about 2% of core issues assessed by its auditors. The violations involved such incidents as overcharging of agency recruitment fees to employees, hiring of underage workers, improper disposal of hazardous waste, and falsification of records related to underage labor and working hours, and in each case Apple reports having worked with the suppliers to address these issues.

As Apple's business has grown, the company has come under increasing scrutiny for the practices of its suppliers and manufacturing partners. The apparent suicide of a Foxconn employee who lost an iPhone prototype and a more recent report on the security at Apple's partners' facilities including a description of the physical assault of a reporter outside a Foxconn compound have added to the publicity surrounding Apple's control over its partners, increasing the need for the company to visibly share the steps it is taking to ensure compliance with company standards.