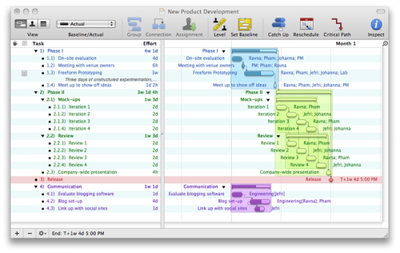 OmniPlan for Mac OS X
In a blog post, Omni Group has committed to bringing five of their productivity apps to the iPad including OmniGraffle, OmniOutliner, OmniPlan, OmniFocus, and OmniGraphSketcher.

Remember how Macintosh was intended to be the computer "for the rest of us"? That's what we feel Apple's iPad is: the best computing device for most of the things people use computers for. (Or, as Apple puts it, "the best way to experience the web, email, and photos.") It's the computer people can sit down and start using immediately, without training, whether they're 2 or 92.

We're really excited about Apple's iPad, and we want to make all of our products available for it as soon as we can.

The Omni Group started life as NeXTStep developers back in 1989. The company made the transition to Apple when Apple acquired NeXT in 1997 and made NeXTStep the basis for Mac OS X.

Omni Group had only previously brought OmniFocus to the iPhone which won a Best of Show Award at Macworld 2008. Obviously, their iPad commitment is far more significant which includes applications which range from project management, diagrams/flowcharts, outlines, and personal task management. Their plans to aggressively move to the iPad will actually delay some future Mac versions of their software.