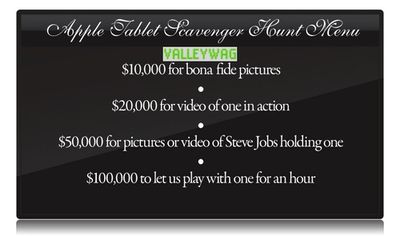 Valleywag today announced that it is offering a bounty of up to $100,000 for information on Apple's much-anticipated tablet device. The reward ladder begins at $10,000 for "bona fide pictures" of the device, increasing to $20,000 for video. Potential rewards for more ambitious tipsters include $50,000 for pictures of Apple CEO Steve Jobs holding the device, and $100,000 for anyone willing to let Valleywag play with it for an hour.

We've had enough of trying to follow all the speculation around Apple's impending tablet -- how it'll work, its size, the name, the software and whether it will save magazines. We want answers, dammit! And we're willing to pay.

As a disclaimer, Valleywag "encourages" tipsters to stay within the law and notes that it will not pay out any prizes until the Apple tablet debuts in order to ensure authenticity. Despite the disclaimer, however, Valleywag's offer could easily face legal challenges as pointed out by TechCrunch.

We spoke to a lawyer about the legality of the bounty, who says that Apple could have a claim against Gawker/Valleywag for inducing breach of contract, since anyone who has their hands on the tablet is certainly under a nondisclosure agreement. This could result in tort damages, with potential for punitive damages.

Apple has reportedly scheduled a media event for later this month, where it is widely expected to introduce the new tablet device, likely giving potential entrants for Valleywag's contest just two weeks to produce their information.