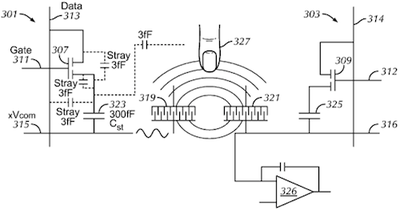 Patently Apple reports on a newly-published patent application from Apple disclosing research on touchscreen technology involving the use of pixels with dual-function capacitive elements that are capable of both displaying images and registering touch input. The invention is designed to simplify the current process of overlaying traditional image pixels with transparent touch sensing materials, thereby allowing for thinner and brighter touchscreen displays.

The highly-technical patent application offers a number of examples of the technology, and provides three examples of devices that could benefit from the invention: an iPhone-like mobile phone, an iPod-like media player, and a personal computer. Not shown in the application but obviously a potential beneficiary of the technology would be a tablet-style device such as that rumored to be forthcoming from Apple.

The patent application, which was filed on September 29th, 2008, is credited to several Apple inventors, including prominent engineers Steve Hotelling and John Zhong.
[ 18 comments ]