Engadget reports that a China-specific iPhone carrying model number A1324 received a five-year approval from China's State Radio Regulatory Commission on May 7th, opening the door for the company to launch the iPhone there. Separately, PC World notes that Chinese news portal Sina.com.cn posted a set of three images (included below) of the new Chinese iPhone earlier today, although it has since replaced the images with a single photo of the rear of the device with text blurred out.

The pictures were posted on Chinese portal Sina.com.cn on Friday morning and showed an iPhone with simplified Chinese characters in its display and inscribed on the back of the handset. Simplified characters are used in mainland China and Singapore, but Singaporean iPhones don't have Chinese inscription on the case. (Hong Kong and Taiwan use more complex traditional characters)

The iPhone in the pictures also carries China's "Environmental Protection Use Period" mark, which indicates the number of years of normal operation during which hazardous or toxic substances included in the product will not leak or change in a way that harms the environment or human health. In the case of the iPhone pictured that length of time is 10 years.

The pulled images depict the Simplified Chinese text on the rear of the device, as well as the device running on China Unicom's 3G network. A deal between Apple and China Unicom, the country's second largest wireless carrier, is reportedly near completion. 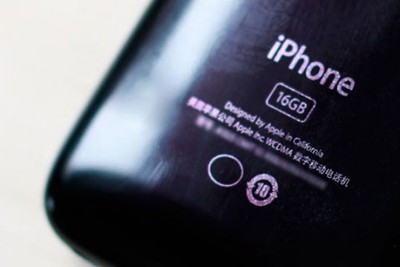 Friday June 18, 2021 9:41 am PDT by Sami Fathi
After a long wait, YouTube for iOS is officially gaining picture-in-picture support, allowing all users, non-premium and premium subscribers, to close the YouTube app and continue watching their video in a small pop-up window. In a statement to MacRumors, YouTube says that picture-in-picture is currently rolling out to all premium subscribers on iOS and that a larger rollout to all US iOS...
Read Full Article • 176 comments

Sunday June 20, 2021 4:15 am PDT by Tim Hardwick
A wireless network naming bug has been discovered in iOS that effectively disables an iPhone's ability to connect to Wi-Fi. Security researcher Carl Schou found that after joining a Wi-Fi network with the name "%p%s%s%s%s%n" his iPhone's Wi-Fi functionality was left "permanently disabled." Changing a hotspot's SSID did nothing to correct the problem, with even a reboot failing to make a...
Read Full Article • 126 comments