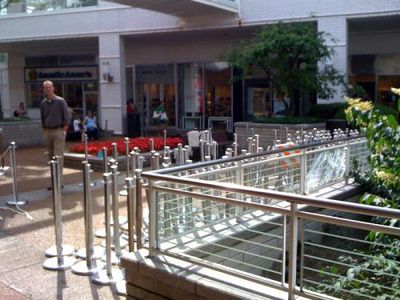 Preparations for iPhone 3G S launch in Oakbrook, IL
Apple's retail stores are opening at 7 a.m. in all time zones to accommodate the launch. MacRumors readers are organizing meetups at retail stores around the world. The first lines are already forming in Tokyo and New York. Meanwhile, the Oakbrook, IL Apple store is preparing for large crowds.

AT&T has detailed their launch as well. AT&T stores will also be opening 7 a.m. nationwide. And this year, customers also have the opportunity to buy at Best Buy or Wal-Mart retail stores.

Pre-order customers should begin getting their iPhone 3G S deliveries tomorrow. Those who reserved units at either Apple or AT&T retail stores will be able to visit the stores to pick up their units at any time during business hours. The Washington Post even profiled readers who have been obsessively tracking their iPhone 3G S orders in our forums.

AT&T has even posted this video of iPhone 3G Ss being packaged at their distribution center:

Monday August 8, 2022 10:43 am PDT by Juli Clover
With the fifth beta of iOS 16, Apple has updated the battery icon on iPhones with Face ID to display the specific battery percentage rather than just a visual representation of battery level. The new battery indicator is available on iPhone 12 and iPhone 13 models, with the exception of the 5.4-inch iPhone 12/13 mini. It is also available on the iPhone X and the iPhone XS. Battery percent...
Read Full Article • 329 comments