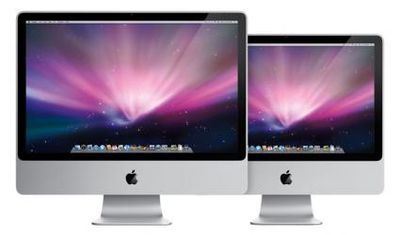 Apple today announced updates to its iMac and Mac mini desktop lines, including a 24-inch iMac and a Mac mini with new NVIDIA integrated graphics. For the same $1,499 price as the previous generation 20-inch iMac, the new 24-inch iMac delivers a 30 percent larger display, twice the memory and twice the storage. Apple also claims up to five times better graphics performance in the new Mac mini with the NVIDIA GeForce 9400M integrated graphics..

"Our flagship 24-inch iMac with twice the memory and twice the storage is now available for just $1,499," said Tim Cook, Apple's COO. "The Mac mini is not only our most affordable Mac, it's also the world's most energy efficient desktop computer."

Apple also updated the AirPort Extreme Base Station and Time Capsule, which are now offering simultaneous 2.4 GHz and 5 GHz dual-band networking "for optimal performance, range and compatibility." The new models also offer the ability to set up a secondary Internet-only Wi-Fi network to allow family and friends to access the Internet without giving them the password to the primary network or allowing them access to networked drives and other peripherals. Finally, Time Capsule offers MobileMe members the ability to access files on their device's hard drive over the Internet from anywhere.