A couple of readers have reported that AT&T hotspots are now offering free Wi-Fi access to iPhone users. Barnes and Noble, Starbucks and presumably AT&T's 71,000 other Wi-fi hotspot locations are now offering iPhone users a custom portal to access free Wi-Fi. A special iPhone formatted page asks for your mobile phone number. Once entered, you can access the Wi-Fi access for free.

MacRumors has been able to confirm this finding at a local Barnes and Noble. Blurry photo provided: 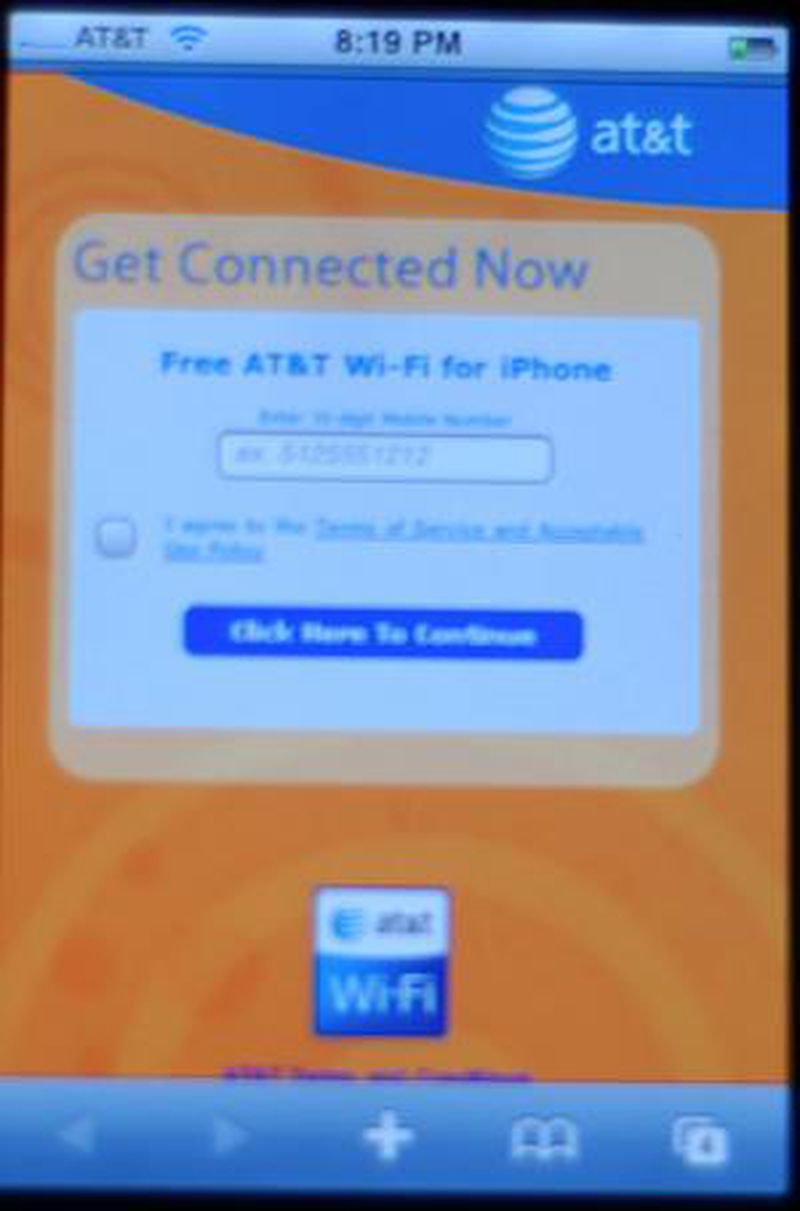 AT&T recently partnered with Starbucks (displacing T-Mobile) to provide Wi-Fi access to Starbucks' 7000 stores nationwide. This partnership allowed existing AT&T broadband customers free access and AT&T promised that it would "soon extend the benefits of Wi-Fi at Starbucks to its wireless customers", but no official announcement has yet been made.

A list of AT&T's 71,000 hotspots can be found on AT&T's site, including Starbucks, Barnes & Noble, Airports, and McDonald's locations.

Update: MacRumors reader ntrigue confirms that AT&T's system is based on the iPhone's User Agent, which can easily be faked on laptops. He successfully accessed the free iPhone Wifi through his laptop (and a valid iPhone phone number)"

Thursday April 2, 2020 4:06 pm PDT by Juli Clover
Apple's new low-cost iPhone is set to launch as early as Friday, April 3, according to a new report from 9to5Mac that cites a tip from a "highly trusted reader." The site says that while it can't be certain about the launch date, "Apple could reveal and begin taking orders for the new iPhone as soon as tomorrow." The iPhone 8 Apple is said to be planning to call the new iPhone, which is...
Read Full Article • 336 comments

Thursday April 2, 2020 12:12 pm PDT by Joe Rossignol
Apple has accidentally referenced its widely rumored AirTags item tracking tags in a video that it uploaded to its Apple Support channel on YouTube today. The video was first spotted by the blog Appleosophy and has quickly been removed. The video was titled "How to erase your iPhone." AirTags were mentioned in Settings > Apple ID > Find My > Find My iPhone under Enable Offline Finding, with...
Read Full Article • 63 comments

Friday April 3, 2020 11:14 am PDT by Juli Clover
Apple is offering employees significant discounts on products that include the HomePod and Beats headphones, according to details on the deals shared by MacGeneration and 9to5Mac. Apple is said to be clearing stock of Beats headphones and HomePods, providing them to employees through an internal deals program. The HomePod is available at a 50 percent discount, dropping the price to $149.50,...
Read Full Article • 93 comments

Saturday April 4, 2020 6:00 am PDT by MacRumors Staff
With the calendar rolling over to April this week, we yet again saw several leaks and rumors, most notably including Apple itself leaking some references to a pair of long-rumored products: a new budget iPhone SE and AirTags item trackers. Subscribe to the MacRumors YouTube channel for more videos. Apple also acquired popular weather app Dark Sky, while Amazon's Prime Video app now allows...
Read Full Article • 30 comments