With Macworld approaching, many concept designs are circulating to demonstrate how Apple might design the upcoming "thin" notebook. Our multitouch article generated a long discussion with a number of unofficial mockups posted. The most attractive, perhaps, is this image posted by kontheur: 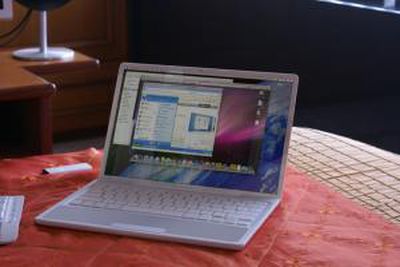 click image for larger
This image shows a mockup of what a thin MacBook might look like complete with a large area for a multi-touch trackpad.

An image that has already seen wide circulation is this one posted by greenrabbit which preserves the MacBook Pro's aluminum casing:

click image for larger
Both images introduce a wide touchpad which is derived from an earlier Apple patent. In 2006, Apple described implementing a wide trackpad and provided the following rendition:

Apple describes its functionality as follows:

"the wide touchpad may be a cursor control device having the capabilities of conventional computer mouse devices, such as the ability to point, drag, tap and double tap objects on a graphical user interface, as well as more general purposes such as scrolling, panning, zooming, and rotating images on display screen."

The patent application also went into detail about how they could ignore accidental palm-rest contact with the trackpad.

Other design concepts that have been circulating include: