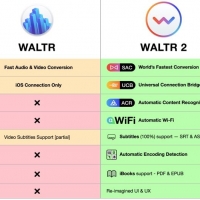 Friday October 28, 2016 4:01 pm PDT by Juli Clover
Softorino today announced the launch of its next-generation WALTR app, introducing WALTR 2 for Mac. WALTR 2 builds on the features introduced with the original WALTR app, making it easier than ever to transfer any file from a Mac to an iOS device. With WALTR 2, you can transfer all kinds of media file types to an iPhone or iPad, even if they're not in a format that's normally compatible with iOS. It supports music, ringtones, videos, PDFs, ePubs, and more, converting files when necessary. If you transfer an MKV or AVI, for example, WALTR 2 will convert it to a usable format and put it directly in the built-in iOS video app. The same goes for music -- upload any music file and it'll be transferred to the Music app with no loss of quality. Uploaded music is even properly recognized in Apple Music. Using WALTR 2 is simple. You open the WALTR 2 app, plug your iPhone or iPad into your Mac (or use the new Wi-Fi feature) and then simply drag and drop the file you want to transfer to an iOS device into WALTR 2. WALTR 2 works with all iPods, iPads, and iPhones, starting with the iPod Classic from 2001. With Automatic Content Recognition for music, movies, and TV shows, WALTR 2 can fill in metadata information, and a new Wi-Fi detection feature allows WALTR 2 to automatically find nearby iOS devices so transferring content can be done without a USB cable if desired. File transfers go much quicker with a cable though, with Softorino promising average transfer speeds of 2GB per minute. New to WALTR 2 is support for ePUBs, PDFs, and audiobooks, which are automatically
Read Full Article • 46 comments 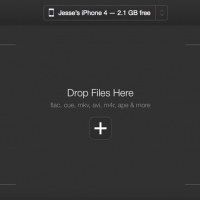 MacRumors Giveaway: Win a Copy of WALTR for Mac

Friday January 29, 2016 10:37 am PST by Juli Clover
For this week's giveaway, we've teamed up with Softorino to offer 15 MacRumors readers a chance to win a copy of WALTR for Mac. WALTR is designed to make it easy to upload any music or video file to an iOS device. With WALTR, you can drag and drop a wide variety of media files onto your iPhone or iPad, and they'll be automatically added to the appropriate native Music or Video app on the device. Supported file types include MP4, AVI, CUE, WMA, M4R, AAC, M4V, M4A, FLAC, ALAC, MKV, LV, M2TS, TS, DV, MPG, MPEG, MPE, WEBM, MB4, AIFF, WAV, OGG, WV, TTA, and DFF. Transferring a file is as simple as plugging an iPhone or iPad into your Mac or PC, turning off iTunes, and dragging any media file onto the Mac app. From there, the file is converted and uploaded to your device within minutes. WALTR is normally priced at $29.99. 15 MacRumors readers will get WALTR for free through our giveaway. To enter to win, use the Rafflecopter widget below and enter an email address. Email addresses will be used solely for contact purposes to reach the winner and send the prizes. You can earn additional entries by subscribing to our weekly newsletter, subscribing to our YouTube channel, following us on Twitter, or visiting the MacRumors Facebook page. Due to the complexities of international laws regarding giveaways, only U.S. residents who are 18 years of age or older are eligible to enter. a Rafflecopter giveaway The contest will run from today (January 29) at 10:00 a.m. Pacific Time through 10:00 a.m. Pacific Time on February 5. The winners will be chosen randomly on February
Read Full Article • 24 comments

Thursday April 9, 2015 11:21 am PDT by Juli Clover
Softorino's WALTR app for the Mac, which is designed to make it easy to upload and convert any music or video file to an iPad or iPhone, is getting its first major update today following its November 2014 release. WALTR will help you drag and drop a wide variety of media files onto your iPad or iPhone, and it supports many different file types, including MP4, AVI, CUE, WMA, M4R, AAC, M4V, M4A, FLAC, ALAC, and MKV. Today's update brings additional formats, full subtitle support, an updated design, and more. New formats that are now supported include LV, M2TS, TS (experimental), DV, MPG, MPEG, MPE, MPEG(old types), and WEBM for video and M4B, AIFF, WAV, OGG, OGA, WV, TTA, and DFF for audio. It also supports subtitles in .SRT and .ASS formats. For those unfamiliar with WALTR, it's incredibly easy to use. You simply plug in your iPad or iPhone to your Mac, turn off iTunes, and drag any media file onto the Mac app. From there, the file is converted and uploaded to your device within minutes, plus it's placed into the proper Music or Video app. WALTR can be downloaded from the Softorino website for free. The software includes a 14-day free trial, after which a single license can be purchased for $29.95. To celebrate today's update, Softorino is giving away 15 copies of WALTR to MacRumors readers. To enter to win, use the Rafflecopter widget below. You can earn additional entries by subscribing to our weekly newsletter, subscribing to our YouTube Channel, following us on Twitter, or visiting the MacRumors Facebook page. Due to the intricacies of international
Read Full Article • 11 comments
Archives
Newer Posts
Older Posts