Messages in iOS 10: How to Use Digital Touch

In iOS 10, the Messages app is gaining Digital Touch, a communication feature that was previously limited to watchOS. With Digital Touch, you can send friends and family drawings, heartbeats, fireballs, kisses, and more, all with just a few taps.


Sketches, taps, and other Digital Touch messages created on your iPhone are also viewable on the Apple Watch and vice versa, giving you plenty of ways to express yourself. Here's how to use the new feature. 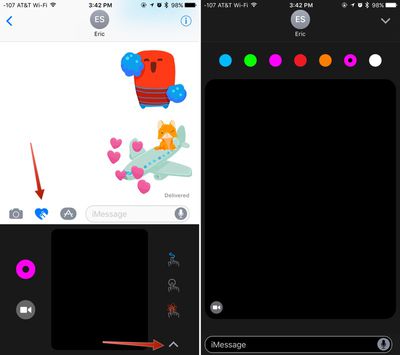 You can send taps and drawings by using the smaller Digital Touch interface that replaces the keyboard, but there's more screen real estate to work with when it's expanded to the size of the full iPhone display.

The Digital Touch interface supports several tap-based gestures to send various taps and icons, plus it allows for drawing with a finger and annotating short videos with the included video tool.

TIP: To access custom colors, long press on any of the color swatches. It'll bring up a color wheel with custom color options for more personalized drawings.

On the Apple Watch, Digital Touch drawings are sent as soon as your finger is removed from the screen for a few seconds, but on the iPhone and the iPad, you can take your time because drawings aren't sent until you tap the send arrow.

The person who receives your Digital Touch drawing will see it drawn out in real time, just as you sketched it. If you make a flower, for example, it'll play like a video, showing each petal drawn in succession.

When you receive a Digital Touch drawing in Messages, tap it and you can see it full screen.

A Digital Touch feature unique to the iPhone and the iPad is the ability to snap photos or record short 10 second videos that can be annotated using Digital Touch sketching tools. Here's how:

There are several different Digital Touch gestures, each with a different effect. You can send kisses, heartbeats, taps, fireballs, and more. Below is a list of the gestures and their effects.

Sending Digital Touch content can only be done on an iPhone running iOS 10 or an Apple Watch running watchOS 2 or 3, but it can be viewed on iOS devices running older versions of the operating system and on Macs in the Mac Messages app.

You can combine all of the photo, sketching, and gesture tools in Digital Touch to create unique multimedia messages to share with friends and family and make communicating more fun.

As a side note, Digital Touch messages are temporary. They will be deleted after a few minutes unless you tap on "Keep" in the messages window to permanently save them.

Cineplex
Okay. The messages app is a mess! The interface is not clean and intuitive at all. Its is so anti-Apple it's not funny.
Score: 5 Votes (Like | Disagree)

sdilley14
The "digital touch" messages seem to send instantly. Example - I press/hold with one finger to send the "fireball", and as soon as I lift my finger from the screen it automatically sends - no "blue send button", no "do you want to send" prompt...just sends instantly. Am I doing it wrong or missing something? Not really a fan of having these messages just send on their own.
Score: 3 Votes (Like | Disagree)

I would prefer the "adult" setting for Messages, which removes most of the new/cute features. Many of the new features are obviously aimed at the under-16 age group. And yes, the interface with all that cutsie stuff is a mess.

Why is it adult or some other type of irrelevant overgeneralized stereotypical grouping that needs to be used there. You want a set of options to control what is available in the Messages app (and perhaps other places), it's that simple and straightforward. For the time being, simply not using those things mostly does the job in a similar fashion.
Score: 2 Votes (Like | Disagree)
Read All Comments