Starting with the 41mm GPS Apple Watch Series 8, you can get the PRODUCT(RED) Aluminum version for $349.00, down from $399.00. This is a match for the all-time low price on this watch, and it's only available in (PRODUCT)RED as of writing. 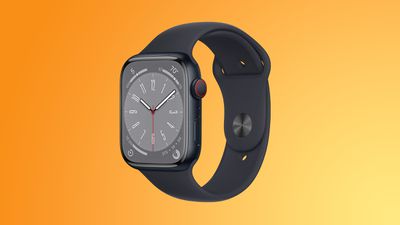 Moving to the 45mm GPS Apple Watch Series 8, you can get (PRODUCT)RED Aluminum for $379.00, down from $429.00. Shipping on this one has been delayed into February, but it is another record low price that you can lock in today.

Lastly, the 45mm Cellular Apple Watch Series 8 is on sale for $479.00, down from $529.00 in a few colors: Starlight, PRODUCT(RED), Midnight, and Silver. This is another best-ever price, and most models are available to ship and deliver this month.

Numerous models of the Apple Watch Ultra have dropped to $749.00 today on Amazon, down from $799.00. This is just about $10 higher compared to the all-time low price we saw during the holidays on the Ultra, so it's a solid second-best price for January.

You'll find sales on Apple Watch Ultra with the Trail Loop, Alpine Loop, and Ocean Band, all with various size options available. The best sale you'll find on any Ultra model this week is $50 off.

Too little value the regular
Models. Do you really need a titanium case in disposable gadget?. How long will you keep it?. 3, 4 years?. The waste of material is crazy…

You complaining about a watch? What about cars? You keep those how many years? The polution and waste of material is crazy......
Score: 3 Votes (Like | Disagree)

Until my iPad Pro can run my macOS based music software AND allow driver support for legacy hardware that I still use (because some of us don't need large, jogwheel based midi controllers), then I am absolutely basing my use case around how small and light I can make my portable travel setup. Sure, I could pay extra ticket fees for this ridiculously large NI S5 controller and rMBP 15" inside a flight case but why, when I could streamline everything into a perfectly capable Air and Novation controller that fits inside my carry-on?

EDIT: So yeah, here's my hand, proudly waving in the air.

Oh for sure! And you are not alone. I was a taper for years. I use everything from the field recording standard Tascam DA-P1 ('https://tascam.com/downloads/tascam/293/DA-P1_TECHDOC.pdf') (which I still have), to a Sony MZ-R55 ('https://www.minidisc.wiki/equipment/sony/portable/mz-r55') (which I also still have). In that world, small/light were certainly important factors. When tapers started moving to laptops, that was dominated by Windows as A) Macs were still the butt of the jokes in the computer world and B) the main DAW was also Windows-based. I was one of the earliest (and only) Mac-based tapers on the scene when I jumped to a the white MacBook ('https://en.wikipedia.org/wiki/MacBook_(2006–2012)'). Looking back at its specs, it's amazing I was able to record rock solid 96k stereo audio for three hours - the latter made possible because that model offered a user-swappable battery. So at set break, I'd swamp out batteries and be ready to rock. Admittedly, from a super Mac-nerd pov, it was pretty cool being the only Mac taper on the scene. So I fully get it: there is a segment of consumer where hyper-portability concerns are a real factor. But those users represent such a small niche when looking across the complete spectrum of customer. And I just don't believe the term Air plays the same role for consumers that it did in 2008. It's a term that has stuck around more out of brand equity, than functional meaning. Ish. ?

But my overarching point, was that Apple's naming and product offerings are a mess. SE, Air, Plus, Max, Pro, Ultra… I think those offer the consumer very little in he way of an intuitive discriptor of what they can expect with any given device. Which is not at all helped by the fact that they are inconsistently leveraged across categories. I'd be interested in simplifying, across the board. Entry-level and Pro-level. That's it. Pretty easy to understand what to expect from each tier. Something like MacBook and MacBook Pro (sure, with multiple screen sizes per). iPhone, iPhone Pro. Mac Studio, Mac Studio Pro. Mac, Mac Pro. iMac, iMac Pro. Studio Display, Studio Display Pro. And so on.

For those that get worked up about this sort of discussion, fear not: Apple's not disrupting their entire product line. It's no more than the harmless ramblings of an insignificant form member. The Apple Store has not changed. The sun will still rise. ?
Score: 2 Votes (Like | Disagree)

Bremse
I bought the ultra around Black Friday when it was on sale for 739. I price matched it at Apple and used gift cards I had purchased through several of the gift card deals that were available. I agree it is expensive (even after the discounts) but I like it a lot better than the 44mm 6 I had before. I love the flat screen and the size makes it a lot more usable. Battery life is a major improvement as well. I actually like the additional weight. It feels very solid.
Score: 2 Votes (Like | Disagree)

A show of hands who is making tech device purchasing decisions based on weight? Every iPad is remarkably thin and light -

Until my iPad Pro can run my macOS based music software AND allow driver support for legacy hardware that I still use (because some of us don't need large, jogwheel based midi controllers), then I am absolutely basing my use case around how small and light I can make my portable travel setup. Sure, I could pay extra ticket fees for this ridiculously large NI S5 controller and rMBP 15" inside a flight case but why, when I could streamline everything into a perfectly capable Air and Novation controller that fits inside my carry-on?

EDIT: So yeah, here's my hand, proudly waving in the air.
Score: 2 Votes (Like | Disagree)