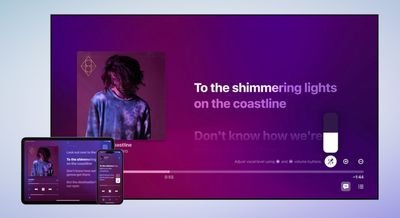 Despite its seemingly simple functionality of showing lyrics and allowing users to sing along in an interactive way, Apple Music Sing will only be supported on select Apple devices. Below, we've listed the iPhone, iPad, and Apple TV models that will support the new experience later this month. Apple Music Sing will not be available on the Mac.

giggles
So the second gen Neural Engine in the A13+ is needed for this feature to work its vocals-suppressing magic.
Score: 9 Votes (Like | Disagree)

jimbobb24
For reasons only known to apple it looks like the A13 is the cut off. Interesting and sad for this recent purchaser of the A12 Apple TV.
Score: 9 Votes (Like | Disagree)

singularity0993
Surprised that M1 isn’t required to sing karaoke! How are those old chips capable of handling playback and recording at the same time! /s
Score: 7 Votes (Like | Disagree)

dpfenninger
So my 2018 11" iPad Pro can basically slice through everything without breaking a sweat but can't run a glorified karaoke machine?

WiseAJ
Why no Mac support? even just for those on Apple Silicon?

I doubt this new feature will have much success. Excluding macs and most Apple TV 4Ks kills a lot of use cases.
Score: 6 Votes (Like | Disagree)

Beatrix Kiddo
This is so Apple.
Score: 4 Votes (Like | Disagree)
Read All Comments