Apple today released macOS Ventura 13.0.1, a minor update to the ‌macOS Ventura‌ operating system that was released in October. The new software comes two weeks after the official launch of Ventura. 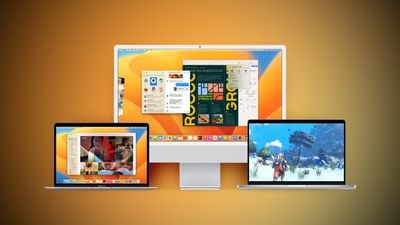 The ‌‌macOS Ventura‌‌ update can be downloaded on eligible Macs using the Software Update section of System Settings.

‌macOS Ventura‌ 13.0.1 is a bug fix update, and it addresses two security vulnerabilities that could allow for unexpected app termination or arbitrary code execution by a remote user. Neither was known to have been exploited in the wild.

AndiG
Ventura … Maybe I‘ll update in late summer 2023. Apple should really follow the Linux distribution path and offer LTS versions. It is a pain in the a** to upgrade every year just for some stupid gimmicks.

What I need is a stable OS that runs my software - i do not need an OS that changes every month and adds some new features and bugs. When I take all the features of the last 5 years, the text recognition in photos is something I really like.
Did I forget something? All the rest is just bloatware, something people should install using the AppStore.
Score: 26 Votes (Like | Disagree)

Ventura … Maybe I‘ll update in late summer 2023. Apple should really follow the Linux distribution path and offef LTS versions. It is a pain in the a** to upgrade every year just for some stupid gimmicks.

Not for nothing, but Linux doesn't run off of an Ubuntu release cycle, let alone the multiple distributions of Linux. RHEL and CentOS certainly don't, Debian doesn't, Slackware never has, and Arch and Mint definitely don't.

What I need is a stable OS that runs my software - i do not need an OS that changes every month and adds some new features and bugs. When I take all the features of the last 5 years, the text recognition in photos is something I really like.
Did I forget something? All the rest is just bloatware, something people should install using the AppStore.

Heh. Then Linux isn't the path for you, especially when you look at what it truly is: the kernel. In a period of 27 days, there were 7 releases of the Linux kernel, and that was just October alone. Oh; and that is the STABLE release branch.

Trust me (I'm a now 30 year long Linux sysadmin), MacOS is a hell of a lot more stable than what you think or are making it out to be.

Jordan Klein
Also, you can scan for and download the full installer from the command line.

BigMcGuire
I don't like how the only way to check for updates is to Command Q the settings app and reopen General --> Software Updates. Otherwise it appears to not even check when you open and close Software Updates. :p

Apple recently acknowledged that in fact it does *not* fully patch security holes in N-1 and N-2 releases of macOS. The following is an excerpt from an Apple support document ('https://support.apple.com/guide/deployment/about-software-updates-depc4c80847a/') updated last month:

Howard Oakley and Joshua Long have written about this, see
https://eclecticlight.co/2022/11/06/last-week-on-my-mac-home-truths-about-macos/
and
https://www.intego.com/mac-security-blog/apples-poor-patching-policies-potentially-make-users-security-and-privacy-precarious/

The bottom line seems to be that in fact one can not run anything less than the current major version of macOS and expect a fully patched system.
Score: 8 Votes (Like | Disagree)
Read All Comments