NBA 2K23 Arcade Edition is set to launch on Apple Arcade on Tuesday alongside the start of the 2022-23 NBA season. The game features updated rosters, a new "The Greatest" mode with the all-time greatest players, more immersive gameplay, and more. 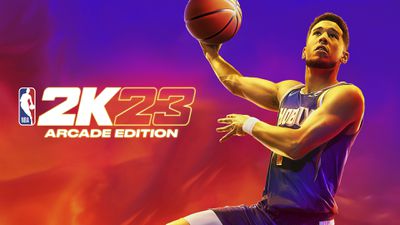 "The Greatest" mode includes 20 of the greatest NBA players from the past and present, including Michael Jordan, Kobe Bryant, Kareem Abdul-Jabbar, Devin Booker, Kevin Durant, and many others. The 2K23 edition of the game also includes new in-game commentary from Kevin Harlan, Brian Anderson, Greg Anthony, Grant Hill, or Doris Burke.

Like the NBA 2K22 edition of the game, there remains an "Association" mode that tasks players with managing an NBA roster by making trades, signing free agents, scouting up-and-coming prospects, and controlling their team's finances, as well as a "MyCAREER mode" where players can start their own NBA journey with a custom player, position, and jersey number. There are also "Quick Match" and online multiplayer modes.

Apple Arcade is a subscription-based gaming service accessible through the App Store. Priced at $4.99 per month or $49.99 per year in the U.S., the service provides subscribers with access to over 200 games across the iPhone, iPad, Mac, and Apple TV. All games on Apple Arcade are free of ads and in-app purchases.

FSMBP
I really want to get into Apple Arcade...but my biggest fear is when games 'leave' their library (or say Apple Arcade shuts down in a year or so).

I get subscription gaming is probably the future unfortunately, but I still like the fact I can turn on my PS2 and tune-out while playing Tony Hawk without worrying if it's in the PSN library. #GetOffMyLawn
Score: 3 Votes (Like | Disagree)

I really want to get into Apple Arcade...but my biggest fear is when games 'leave' their library (or say Apple Arcade shuts down in a year or so).

I get subscription gaming is probably the future unfortunately, but I still like the fact I can turn on my PS2 and tune-out while playing Tony Hawk without worrying if it's in the PSN library. #GetOffMyLawn

Don't bother. The games on Apple Arcade are available on much better platforms, most notably Nintendo Switch and Steam. Just get them there. Or hell, just get an Xbox or a PC and subscribe to Xbox Game Pass
Score: 3 Votes (Like | Disagree)

petsk
22 version sucks even on ps5, can’t imagine what it’s like on apple tv. Waste of money.
Score: 2 Votes (Like | Disagree)

Yep, I've not been to happy since Apple switched its strategy from "Commit to it, and dominate" to "Throw it against the wall, if it sticks, then keep it, otherwise drop it and find something else to throw against the wall."

Kinda hard these days to get on the Apple wagon because it just might fall apart in a few miles.

This is why the only Apple thing I care about are the Apple Silicon Macs, and this is coming from a guy who was a Mac hater all his life until the transition happened. Everything else has been lame.

Hell it's gotten to the point I wanna try out Android now.
Score: 2 Votes (Like | Disagree)

Huh... the pachinko mini-game looks to be far more fun than the actual game itself! And yeah, booster packs. For a NBA basketball game. Disappointed, but can't say I'm surprised :(

And I haven't even touched on the UNSKIPPABLES ADS DURING GAMEPLAY, IN A GAME THAT COSTS $70 AND LOADED WITH MICROTRANSACTIONS!