Apple and Major League Baseball today announced the August schedule for "Friday Night Baseball," with all of the games available to watch for free on Apple TV+ without a subscription. Assigned broadcasters for each game will be announced on a weekly basis. 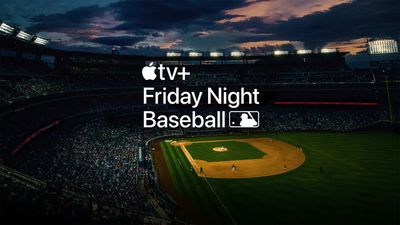 The weekly "Friday Night Baseball" doubleheaders, along with live pregame and postgame shows, can be watched in the Apple TV app across the iPhone, iPad, Mac, Apple TV 4K and Apple TV HD boxes, select Xbox and PlayStation consoles, select smart TVs, on the web at tv.apple.com, and elsewhere. The games are available to watch in the United States, Canada, Australia, Brazil, Japan, Mexico, South Korea, and the UK.

The schedule is as follows:

"Friday Night Baseball" debuted on Apple TV+ in April and will continue throughout the 2022 regular season, with no subscription required for a limited time.

BobSc
Sad that this forum has just become a avenue for so many to express their hate of anything and everything. Apple is give you something for free. The video of these games is excellent. What are so many complaining about. If you don't want to watch, then don't and move on. This forum has simply become an absolute waste of time. If I want to read about hate, I can just watch politics.
Score: 6 Votes (Like | Disagree)

ZipZilla
The production and camerawork of these games is top-notch. But the podcaster/announcers Apple is using is a swing and a miss.
Score: 6 Votes (Like | Disagree)

MareLuce
I’ve gone from being not interested in Baseball to being somewhat interested thanks to Apple TV’s broadcast.

There’s something kinda chill about having it on and periodically hearing the “crack” of the bat on the ball while I do other things.
Score: 5 Votes (Like | Disagree)

... Full disclosure, I am a huge baseball and tune into all teams ...

That's impressive. Since a baseball has no fingers - are you using Siri to respond on this forum? ?
Score: 5 Votes (Like | Disagree)

Sad that this forum has just become a avenue for so many to express their hate of anything and everything. Apple is give you something for free. The video of these games is excellent. What are so many complaining about. If you don't want to watch, then don't and move on. This forum has simply become an absolute waste of time. If I want to read about hate, I can just watch politics.

The person who went on the diatribe about baseball crapped on the fitness plus badges a few days ago also.
Score: 3 Votes (Like | Disagree)

Program Install
I find the Apple TV+ broadcasts refreshing for Friday Night MLB. The announcers are not your standard POV, but they add some different perspectives to the game that I find unique. Full disclosure, I am a huge baseball fan and tune into all teams, not just my Phillies. If you aren't currently a fan this probably will only get you to casually watching, not make you a diehard.
Score: 3 Votes (Like | Disagree)
Read All Comments