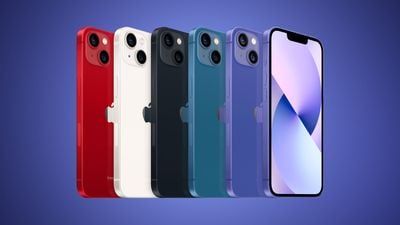 TrendForce said the iPhone 14 Pro models will be upgraded to a faster and more power efficient type of RAM known as LPDDR5, while the standard iPhone 14 and iPhone 14 Max models are expected to stick with LPDDR4X.

If the report proves to be accurate, the iPhone 14 lineup would compare as follows:

The report lines up with information shared by Apple analyst Ming-Chi Kuo, who also claimed that all four iPhone 14 models would be equipped with 6GB of RAM and that iPhone 14 Pro models would be upgraded to LPDDR5.

TrendForce also suggests that iPhone 14 Pro models may start with 256GB of storage, compared to 128GB for iPhone 13 Pro models, but the chart says the storage capacities are "TBD," so this information appears to be less certain.

As previously rumored, two features expected to be exclusive to iPhone 14 Pro models are an upgraded 48-megapixel rear camera lens and an A16 chip. The standard iPhone 14 models are expected to stick with an A15 chip.

With what kind of apps is that amount of RAM necessary?

Not many, but more RAM lets iOS keep more apps in memory rather than loading them from (and swapping or storing their state to) NAND each time. That, in turn, improves performance and extends battery life.
Score: 16 Votes (Like | Disagree)

TheYayAreaLiving ?
Why does the chart say, Frame: Steel. Are we not getting the titanium chassis for iPhone 14 Pro and Pro Max Line up?
Score: 14 Votes (Like | Disagree)

cwwilson
Hmm... Was kind of hoping the Pros would get boosted to 8GB but it's not like my 13 PM struggles with 6. Just think it's weird they might upgrade the lower end models but keep the higher ones the same.
Score: 11 Votes (Like | Disagree)

Hmm... Was kind of hoping the Pros would get boosted to 8GB but it's not like my 13 PM struggles with 6. Just think it's weird they might upgrade the lower end models but keep the higher ones the same.

The base iPad isn't really designed for multitasking. It was designed to be really cheap. The iPad Pro was designed as a laptop replacement.