Apple last week introduced an updated iPad Air with an M1 chip, and now the new tablet is available for purchase. We picked one up to see how it compares to the iPad Pro, which also has an ‌M1‌ chip, to give you an idea of which of Apple's iPads is right for you. 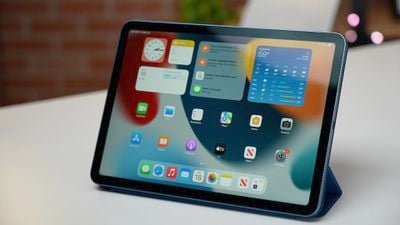 There are no other visual updates, and the ‌iPad Air‌ features the same all-display design with 10.9-inch screen and Touch ID Power Button. Unlike the ‌iPad Pro‌, it does not have 120Hz ProMotion support, which is now one of the main differences between the Pro and Air iPad lines. If you're used to ProMotion, the lack of it on the ‌iPad Air‌ can be jarring, but if you've never had ProMotion, you won't know the difference.

Though Apple didn't change the look of the ‌iPad Air‌, there are internal changes. Most notably, the ‌iPad Air‌ is using the same ‌M1‌ chip as the ‌iPad Pro‌, so in terms of performance, they're identical. You won't see any speed differences between the two lines until the ‌iPad Pro‌ gets an update with a faster chip, which is expected to happen later this year.

Apple added a new 12-megapixel Ultra Wide front-facing camera to bring the ‌iPad Air‌ in line with the ‌iPad Pro‌, and it supports Center Stage, the feature that keeps you in frame as you move about the room.

You're only going to be missing out on the faster 5G mmWave connectivity, the ProMotion display, and Face ID, and if these are important to you, you should hold out for the next-generation ‌iPad Pro‌ before upgrading.

Did you pick up a new ‌iPad Air‌? Let us know what you think in the comments.

Nice to see the iPad Air get an M1 chip. Pricing looks pretty good. Wish it had 128GB RAM included in the base model though.

dabi
God, if they sold a device like this but with macOS on it, that'd be such a perfect device for me. Basically an answer to the Surface Pro. M1 feels like such an overkill for iOS, idk.
Score: 26 Votes (Like | Disagree)

nwcs
Honestly, I had ProMotion on my old iPad Pro. Went to something else that doesn't have it. Not jarring and not missed, really. It's a minor nice to have for me.
Score: 25 Votes (Like | Disagree)

zorinlynx
Seeing as the newer iPads now have Macbook level of CPU power and memory, has there been any change to how iPadOS handles background applications?

For example, I have an SSH app that allows you to do port-forwarding, but if I want it to work in the background I have to enable GPS location tracking in the app, which is the developer's workaround to making sure the app doesn't get suspended. Otherise the app only gets 30 seconds.

It's a total hack and shouldn't be necessary on an iPad with an M1 chip.

These restrictions and limitations make sense on a phone, and on iPads from five years ago, but it's absurd that we still have to deal with them today. I'm hoping Apple eventually eases up on this and stops making developers use stupid hacks like using GPS to keep apps running in the background. If they do, I might see it fit to finally buy a new iPad; I'm still using a 2016 era iPad Pro (and using it less and less lately).
Score: 19 Votes (Like | Disagree)

Lakersfan74
For $50 more you get Face ID, promotion, quad speakers and a better camera with flash going with the 128 GB Pro 11 inch over the 256 GB Air
Score: 19 Votes (Like | Disagree)
Read All Comments