Apple's newest store in Berlin, Germany is set to open on Thursday, December 2, Apple announced today. Apple Rosenthaler Straße is the first Apple Store in the Mitte borough of Berlin, and it joins Apple Kurfürstendamm in the city. 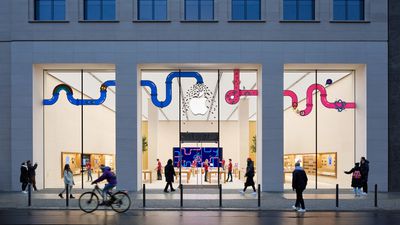 "We're excited to open our second store in Berlin, right in the heart of Mitte," said Deirdre O'Brien, Apple's senior vice president of Retail + People. "Blending Apple's exceptional technology and tools with the creative passion we share with this community gives us the opportunity to create something really special for our customers in Germany."

Located near the Hackesche Höfe, Apple Rosenthaler Straße is located in a historic part of the city that's surrounded by design firms and art studios. The store features the same general ‌Apple Store‌ design that Apple has deployed worldwide with dedicated tables that highlight product options, a Forum and video wall, and a dedicated area for product pickups. There are seven-meter high floor-to-ceiling windows and towering trees inside to complete the look.

To celebrate the store's opening, Apple plans to host Berlin artists from illustrator collective Parallel Universe. Each artist will draw their take on Mitte's creative spirit using an iPad Pro, and customers can also start signing up for Today at Apple classes.

Apple Rosenthaler Straße is set to open on Thursday, December 2, at 10 a.m. CET in Berlin. Customers will be able to book appointments for an introduction to the store and shopping, with limited capacity and social distancing measures in place. Starting on December 3, the location will offer walk-ins, pickups, and Genius Bar support.

a m u n
The attention to detail is outstanding.

Why the pipe motif?

I'm sure my lack of cultural knowledge is glaring...

Hakiroto
I walked past it today and it looked great. There was a pretty big queue outside and it was busy inside. It's nice to finally have a store over this side of the city.
Score: 2 Votes (Like | Disagree)

Why the pipe motif?

I'm sure my lack of cultural knowledge is glaring...

The difference between the blue and pink pipes is that they are owned by different companies.
To describe the problem of groundwater, two examples: During the construction of Berlin's huge main railway station with four platforms below the surface, a huge lake was created after excavation, which was pumped out after sealing the walls and the ground.
During the construction of a new underground line in Berlin, the ground around the tunnel had to be frozen during the entire construction period, and only after the tunnel had been sealed could the ground be thawed again.
There is a saying that construction activity in Berlin will only end on the Day of Judgement. That's why these pipes will continue to dominate the cityscape for a long time.
Score: 2 Votes (Like | Disagree)

sdz
I miss the graffiti... Only a question of time
Score: 1 Votes (Like | Disagree)