While it may feel rather hard to believe, today marks one year since the first Macs with Apple silicon were unveiled to the world. 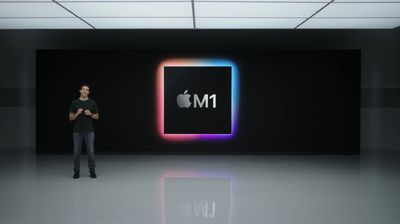 At a virtual event on November 10, 2020, Apple introduced its custom-designed M1 chip, followed by three new Macs powered by the chip, including the MacBook Air, the lower-end 13-inch MacBook Pro, and the lower-end Mac mini.

With the M1 chip, Apple delivered on its promise of industry-leading performance per watt and faster integrated graphics than Intel processors.


"When it comes to low-power silicon, M1 has the world's fastest CPU core, the world's fastest integrated graphics in a personal computer, and the amazing machine learning performance of the Apple Neural Engine," said Johny Srouji, head of Apple's chip design team, in a press release. "With its unique combination of remarkable performance, powerful features, and incredible efficiency, M1 is by far the best chip we've ever created."

Benchmark results quickly revealed that even the MacBook Air with the M1 chip outperformed a maxed-out Intel-based 16-inch MacBook Pro, and the first Apple silicon Macs received overwhelmingly positive reviews for their performance.

Apple expanded the M1 chip to a new 24-inch iMac in April, and last month it unveiled even faster M1 Pro and M1 Max chips for the 14-inch and 16-inch MacBook Pro.

"No one has ever applied a system-on-a-chip design to a pro system until today with M1 Pro and M1 Max," said Srouji. "With massive gains in CPU and GPU performance, up to six times the memory bandwidth [compared to the M1 chip], a new media engine with ProRes accelerators, and other advanced technologies, M1 Pro and M1 Max take Apple silicon even further, and are unlike anything else in a pro notebook."

At this moment, the 27-inch iMac, the high-end Mac mini, and the Mac Pro tower are the only remaining Intel-based Macs that Apple still sells, but even those models are expected to transition to Apple silicon within the next year or so.

The Information's Wayne Ma recently claimed that the next Mac Pro will use a variant of the M1 Max chip with at least two dies for even faster performance, adding that a future high-end Apple silicon chip could offer up to a 40-core CPU.

Last month, when asked if Intel has given up on the idea of the Mac running on Intel processors in the future, Intel CEO Pat Gelsinger said that he hopes to win back this segment of Apple's business over time by making better chips than Apple. In the meantime, Intel has run ads promoting Intel-based PCs over Macs, and it even recruited actor Justin Long from Apple's iconic "I'm a Mac" ads for the campaign.

I wonder if Apple will bring Chips like M1, M1 Pro or Pro Max to the iPhone series? Imagine how big of a transition it would be.

If by transition, you mean the transition of your battery life from 100% to 0% in no time.

The A series chips are already close enough, there's no need to try put a laptop chip in a phone.
Score: 16 Votes (Like | Disagree)

JonathanLevine
I’m just eager to see how far they can take it when the new Mac Pro with Apple Silicon comes out. Going to be an absolute monster of a computer.
Score: 11 Votes (Like | Disagree)

What an incredible year. Congratulations to all the amazing people at Apple.

It’s amazing, when one steps back, to think about the number of industries that Apple has transformed and the enormous companies which have been kicked to the curb from the hand of Apple innovation. From music to camera to telecommunications to computing to chipsets. Thank heaven Apple is so privacy and innovation focused.

Hi Tim :D
How are those glasses and that car coming along?
Score: 9 Votes (Like | Disagree)

I believe Apple made a right call by transitioning and focusing on in-house chips. It was a game changing move by Apple. Can’t wait till M2 is unleashed on a MacBook Air!
Score: 7 Votes (Like | Disagree)
Read All Comments