Today we're tracking a few notable discounts across Apple and Beats products, including the first straight cash markdown on the AirTag 4-pack. 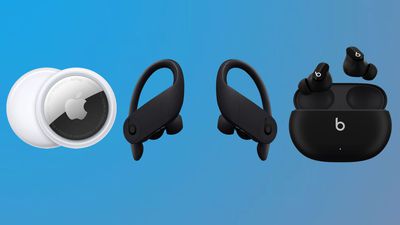 At Woot, you can get the AirTag 4-pack for $94.99, down from $99.00. While this isn't a particularly steep discount, it is one of the first times we've tracked any deal on the AirTag 4-Pack, so if you've been holding off now is a great time to buy the accessory.

The AirTag 4-pack comes with a one year Apple Manufacturer Limited Warranty, and has a delivery estimate between October 13 and October 15. Amazon Prime members get free standard shipping as well, but you don't need to be a Prime member to get the deal.

As part of its new pre-holiday "Epic Daily Deals" event, Amazon today expanded the sale to include a few Beats headphones at notable low prices. This starts with the Powerbeats Pro at $159.95, down from $199.95 in Black, Cloud Pink, Glacier Blue, Ivory, Lava Red, and Navy.

This is a match of the previous Amazon all-time low price, and overall the second-best price we've ever tracked on the headphones. This deal will last one day only, and expire later tonight.

Similarly, you can get the Beats Studio Buds for $124.95, down from $149.95 in Black, Red, and White. This sale doesn't have a specific end date, but it's under the Epic Daily Deals banner so if you're interested be sure to make your purchase soon.

You can also get the Beats Studio Buds for the same price from Target, Best Buy, B&H Photo, and Walmart.