Apple today released a new version of its iCloud for Windows app, with the 12.5 update adding a new ‌iCloud‌ Keychain password manager app for Windows users. 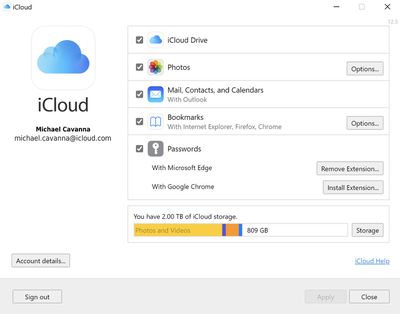 With the new password management option, those who are running Windows can access their ‌iCloud‌ Keychain passwords and can add, edit, copy and paste, delete, and look up usernames or passwords. Apple in January released an updated version of ‌iCloud‌ for Windows that hinted at the new password app, but Apple did not implement it until now.

New ‌iCloud‌ password extensions for Microsoft Edge and Windows Chrome work in tandem with the password feature, letting ‌iCloud‌ passwords be autofilled on a Windows machine just like in Safari. Usernames and passwords created for websites are automatically added to the Passwords app.

nicroma
It's a shame there's no Firefox extension button. I was happy to see this update for a moment.
Score: 16 Votes (Like | Disagree)

It's a shame there's no Firefox extension button. I was happy to see this update for a moment.

It's ironic how poorly Apple is when it comes to supporting native features and API's outside their own platforms when they expect anyone developing for Apple platforms to adopt all the latest API's and capabilities of their native platforms. All their offerings for Windows is lacklustre and reeks of bare minimum effort. Same goes for things like Apple Music for Android that doesn't cohere to any of Google's UX design rules or guidelines whatsoever.

Considering all modern browsers, including Safari with v15 are all using the same WebExtensions API there is no reason for Apple to not allow Keychain to be integrated with everything from Microsoft Edge and Google Chrome, to Brave, Mozilla Firefox etc.

If Apple expect developers to start adding all their browser extensions to Safari with the move to WebExtensions with Safari v15 they should lead with a good example and do the same with their Keychain integration on Windows. Don't create these artificial limitations when there is no need for them when all these browsers are using the same baseline for their extensions.
Score: 11 Votes (Like | Disagree)

Sorry if you knew this already but Edge for macOS is a thing.
Score: 9 Votes (Like | Disagree)

now i see it
Unfortunately "iCloud" has recently become a dirty word
Score: 7 Votes (Like | Disagree)
Read All Comments

Wednesday November 10, 2021 11:07 am PST by Juli Clover
Apple today introduced a major update to iCloud for Windows, bringing the version number for the software to 13. Apple has added support for Apple ProRes videos and Apple ProRAW photos, so files in these formats can now be accessed from Windows PCs via iCloud. All participants of an iCloud Drive shared file or folder are now also able to add or remove people, and Apple has introduced support ...
Read Full Article • 106 comments

Wednesday November 24, 2021 3:42 am PST by Tim Hardwick
Mozilla has told users of its Lockwise password management app that it will officially end support for the app on December 13. While the password manager will continue to work after that date, it will no longer receive support or security updates. Lockwise began life in 2018 as Lockbox, an open-source mobile app for iOS, Android, and desktop that allowed users to access login credentials and ...
Read Full Article • 30 comments