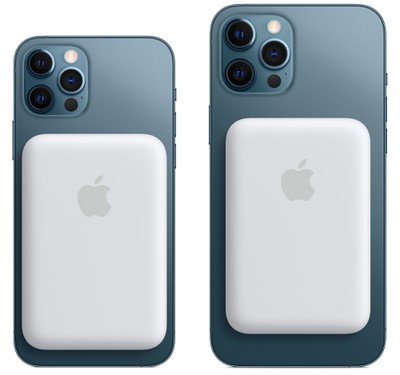 When attached to an iPhone that's charging via Lightning, the ‌iPhone‌ can deliver power to the MagSafe Battery Pack, which is the first instance of an ‌iPhone‌ being able to route power to an accessory device.

With the ‌MagSafe Battery Pack‌, the ‌iPhone‌ has to be plugged in for the charging feature to work, but it's certainly a step in the right direction and hints at more expansive reverse wireless charging capabilities in the future. Given the ‌MagSafe Battery Pack‌'s reverse wireless charging feature, it seems technically possible that an ‌iPhone 12‌ could deliver power to the AirPods or AirPods Pro, but Apple has not yet implemented this feature.

Apple has suggested that ‌MagSafe Battery Pack‌ users might want to use the ‌iPhone‌ passthrough charging feature when the ‌iPhone‌ is connected to a power source like wired CarPlay and is able to charge both accessories.

szw-mapple fan
Does this mean I can eventually use the iPhone mini as a MagSafe Battery for a Pro Max? :p
Score: 15 Votes (Like | Disagree)

_Spinn_
I’m surprised the rumors were actually true. Hopefully they enable reverse charging for AirPods though I’m not holding my breath.
Score: 11 Votes (Like | Disagree)

I knew it. This thing has no port.

no, you can plug the battery into the Battery Pack and charge it that way too. And it will also charge the iPhone at the same time. so it goes both ways.

Before you use your MagSafe Battery Pack for the first time, fully charge it using a Lightning to USB cable with a 20W or higher power adapter.

Eorlas
$100 for a bulge that has less than half the phone’s capacity.

much less money can buy high quality battery packs with substantially higher capacity, and will charge other things
Score: 9 Votes (Like | Disagree)

macsplusmacs
and the "bulge" is the easiest bulge to put on and take off ever.

if you have plenty of charge in your iphone, don't put it on.

if you are running out of power. put it on.

in this respect much more flexible than the smart case from apple which i loved on my iphone 11.
Score: 9 Votes (Like | Disagree)

Tuesday July 20, 2021 11:14 am PDT by Juli Clover
The new MagSafe Battery Pack that Apple debuted this week is arriving to customers starting today and it's also now available for in-store pickup in many Apple retail locations around the world. We snagged one this morning and thought we'd take a look at it to let MacRumors readers know if it's worth the $99 asking price. Subscribe to the MacRumors YouTube channel for more videos. As the name ...
Read Full Article • 130 comments

Thursday July 22, 2021 2:27 pm PDT by Juli Clover
Apple's MagSafe Battery Pack designed for iPhone 12 models came out this week, and Charger Lab has taken one of the new accessories apart to give us a look at its inner workings. The teardown has detailed information on how the MagSafe Battery Pack works and what each component inside does. There are two charging coils inside, shielding for heat dissipation, and a magnetic ring that allows...
Read Full Article • 45 comments

Monday March 1, 2021 1:18 pm PST by Juli Clover
Apple is working on MagSafe-compatible battery packs that will be compatible with the iPhone 12 models, and leaker Jon Prosser today said on the Genius Bar podcast that one version of the battery pack will feature "reverse charging." According to Prosser, Apple is working on two versions of the battery packs, one that's a standard version and one that's a premium version with reverse...
Read Full Article • 104 comments

Friday July 23, 2021 1:57 am PDT by Sami Fathi
Nomad has opened pre-orders for leather covers for Apple's MagSafe Battery Pack, allowing customers to protect not only their $99 battery pack but also an opportunity to customize its look with two different colors. Apple's MagSafe Battery Pack was launched last week for $99 and is meant to provide iPhone 12 users an easy and convenient way to charge up their device on the go. Apple is only...
Read Full Article • 71 comments

Tuesday February 23, 2021 7:49 am PST by Joe Rossignol
Following rumors that Apple is working on a MagSafe battery pack for iPhone 12 models, popular accessory maker Anker has beaten Apple to the punch with the release of its PowerCore Magnetic 5K Wireless Power Bank. First previewed at CES 2021, the PowerCore battery pack magnetically attaches to the back of any iPhone 12 model and provides 5W of wireless charging. With a 5,000 mAh capacity,...
Read Full Article • 64 comments

Monday March 29, 2021 8:00 am PDT by Sami Fathi
Hyper today officially launched the HyperJuice Magnetic Wireless Battery Pack for the iPhone 12 lineup, allowing customers to utilize MagSafe and wireless charging technology to power up their iPhones on the go. The battery pack only uses MagSafe to align itself magnetically to the iPhone 12 – it doesn't actually do the charging using MagSafe technology. Instead, it will charge the iPhone ...
Read Full Article • 57 comments