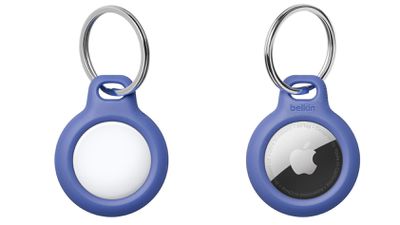 Available as a Key Ring or a Strap, the $12.95 Belkin Secure Holder is designed to keep an AirTag in place and attached to an item of your choice. It features a twist-and-lock closure with raised edges to keep the AirTag from getting scratched, and it comes in white, pink, black, and blue.

Belkin plans to begin selling the Belkin Secure Holder on April 23, and it will be available from Apple.com.

Moment has a range of AirTag Mounts available that house an AirTag and are able to stick on various items. Moment says that you can stick an AirTag mount in bags, on clothes, or on the bottom of different devices, and with the adhesive stick method, AirTags can be hidden from thieves.

There's a Fabric Mount, a Hard Shell Mount, and a Curved Surface Mount with prices ranging from $14.99 to $19.99. Pre-orders are available starting today, and Moment estimates that the Mounts will ship out in July.

Nomad debuted its Leather Keychain well ahead of the launch of the ‌AirTags‌, but it's now officially available for pre-order. Priced at $30, it comes in either black or brown and houses a single AirTag. It can be attached to bags or other items, plus Nomad is also offering a $30 Glasses Strap with built-in AirTag holder for keeping track of your sunglasses.

Nomad's accessories are available for pre-order today, and the company estimates that they'll be shipping out in July.

dbrand has a series of Grip Cases available for ‌AirTags‌ in a variety of colors. Each grip fits over the AirTag and adds a skin and an attachment point to place it on bags and other items. The Grip Cases are priced at $19.95 each and will be available in May.

Apple of course makes its own series of AirTag cases, which are available in either silicone or leather and are priced at $29 to $39, plus there are several high-end Hermès AirTag holders priced starting at $299.

‌AirTags‌ will be available for preorder on Friday, April 23 and will ship out on April 30. ‌AirTags‌ are priced at $29 for one or $99 for four.

I am SO pumped for AirTags!!! but doesn’t it have a hole already??

This is actually a clever way of how Apple trigger third party makers to make accessories for their product. Instead of making a hole (like Tile and Samsung SmartTag), buyer will need another accessories to attach it. So there will be more demand for its accessories, and more and more third party maker will join to produce it, making this product seems more valuable, customisable and personal.

Now compare this to Tile and Samsung SmartTag, buyers won't necessarily need another accessories since it already has a hole. So its not very popular for third party maker to make accessories for it.

This is something that make Apple looks 'stupid' for designing the AirTag without a hole, but very brilliant to expand the product's value when it's getting attention with more and more accessories produced for it.
Score: 15 Votes (Like | Disagree)

mw360
And the environmental impact of all that needless tat, versus just putting a hole in the tag?
Score: 15 Votes (Like | Disagree)

Darth Tulhu
Never really paid attention to AirTags until the presentation. Now I get it.

More lock-in into the ecosystem.
Score: 13 Votes (Like | Disagree)

I get the complaints of "no hole" but considering this is slightly larger than the CR2032 battery.. there is no room. Unless you create a square block like the Tile... this is a win for Apple. Had they made it square with a non-replaceable battery, there would be a whole new set of complaints.
Score: 10 Votes (Like | Disagree)

DocMultimedia
Ouch. I would definitely want to have an AirTag to keep track of my $300 Hermes chunk of leather.
Score: 8 Votes (Like | Disagree)

And the environmental impact of all that needless tat, versus just putting a hole in the tag?

Booring. You are boring everyone.

Everything in life has trade offs.
Score: 8 Votes (Like | Disagree)
Read All Comments