Since 2019, Spotify has been working on "Car Thing," a voice-controlled music and podcast assistant. After Spotify announced Car Thing, little else was said about it, but it appears the company is gearing up for some kind of launch. 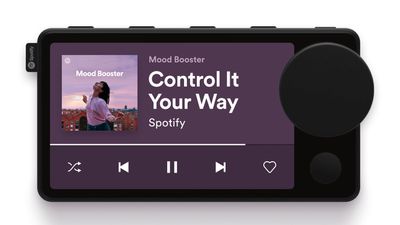 Back in January, Car Thing showed up in FCC filings, and now, images of Car Thing have been located in the Spotify app code. MacRumors contributor Steve Moser found several pictures of the Car Thing, giving us a clear look at the new device.

Spotify's original Car Thing had a small circular screen with several controls available on a side panel, but the new version features a much larger rectangular display that's closer in design to a smartphone, along with a large control knob and a smaller button.

We don't know what the control knob or the smaller button do, but Spotify's FCC filing described Car Thing as a "voice controlled accessory for phone/Spotify App with supporting display and buttons." It is Bluetooth-enabled and able to communicate with in-car head units, and it is powered from a 12V outlet.

Photos of various mounts are also included in Spotify's app, indicating that Car Thing will be able to be attached to a dash or mounted to a vent in the car, and it will perhaps be sold with these mounting options. There are indications that directions will be supported in some capacity, perhaps through the Waze/Spotify partnership.

When Car Thing was announced, Spotify said it was a test device developed to help the company understand more about how people listen to music and podcasts, and that there were no plans to make the device available to consumers. Spotify has, however, continued work on this device for the last two years and has changed its design significantly, which suggests it could eventually see a launch.

There's one other unreleased feature for Podcasts that's worth noting - comments. In the Spotify app, there's code for leaving comments on podcasts, something that's not currently available. Spotify users will be able to comment on podcast episodes, and creators will be able to respond.

bigchrisfgb
It would be stupid for them to launch a device for your car. Most cars these days come with CarPlay and AndroidAuto. You can get plenty of aftermarket options as well.
There is no need for anyone to buy a Spotify only device, especially when you could even just mount your phone as well.
Score: 3 Votes (Like | Disagree)

chrisone
I wish they would work on better iOS integration instead. A Spotify-only device makes little sense, better to be fantastic on Android Auto and Apple CarPlay
Score: 3 Votes (Like | Disagree)

starman111
Back in 2007 a friend of mine held up his iPhone and said, "Do you know what this is? It's the death of every mobile electronic device that only performs one primary purpose."

That was true in 2007, and it's certainly true now. This Spotify device is going to flop.
Score: 3 Votes (Like | Disagree)

Excellent attention to detail. I particularly like the way the front surface is lovingly crafted to look like Duct tape. And those flourishes on the top - pure class. Johnny could learn a thing or two from this.

Where can I buy one. Take my money.
Score: 2 Votes (Like | Disagree)

It would be stupid for them to launch a device for your car. Most cars these days come with CarPlay and AndroidAuto. You can get plenty of aftermarket options as well.
There is no need for anyone to buy a Spotify only device, especially when you could even just mount your phone as well.

I would love to have a device like this but with Apple CarPlay -- I am unable to change my factory headunit.
Score: 2 Votes (Like | Disagree)
Read All Comments