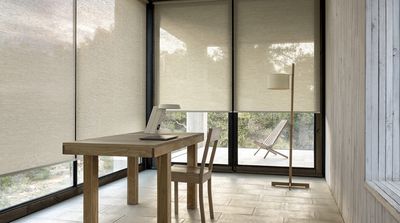 According to HomeKit News, the new range will include wireless motors to work with roller blinds, Venetian blinds, cellular shades and curtains. Notably, they will also be the first product of their kind to support the Thread wireless protocol, of which Apple is a supporter.

Thread is a low-power IP-based networking technology for connecting Internet of Things (IoT) devices, offering a secure, mesh-based system that makes it easy to build an ecosystem of devices. Eve plans to help to equip the Coulisse curtains with HomeKit and Thread integration and to spread them in a wider market.

"Thanks to the Eve software, this new motor range is a game changer in the interior window coverings market," said Christiaan Roetgering, owner and CEO of Coulisse. "The simplicity of both installation and use is unmatched. All complexity is eliminated, and the installation time drastically reduced. Combined with the fact that you don't need a hub anymore this offers major cost advantages. It opens up the way to make motorized blinds available to a broad audience and widely embraced as a product that brings joy and value to everyday life in the home."

While Thread is essentially agnostic to the application layers that run on top of it, it can support multiple layers and may play a role in Project Connected Home over IP, the alliance of Apple, Amazon, Google, and other companies that is seeking to make it simpler to build devices compatible with multiple ecosystems such as Siri, Alexa, and Google Assistant.

The HomePod mini is Apple's first (and currently only) product to support Thread networking technology. For the time being, however, Apple says in a footnote that ‌‌HomePod mini‌‌'s Thread support is limited to ‌HomeKit‌ devices, so the technology can't yet be leveraged cross-platform and it remains to be seen how Apple will embrace Thread going forward.

Apple is a noted supporter of the Thread project, with longtime Apple engineer Stuart Cheshire, who developed the Rendezvous/Bonjour zero-configuration standard nearly 20 years ago, serves as a director of Thread Group.

Coulisse is keen to emphasize how secure the combination of ‌HomeKit‌ and Thread is, since they be can linked with other ‌HomeKit‌ products and all data is stored locally. The roller blinds can be connected via Bluetooth, but Thread should in theory offer a more resilient connection by linking up with nearby Thread-supporting "hubs" such as a ‌HomePod mini‌.

According to iCulture, the roller blind motors will be launched in the second quarter of 2021. More information on the Coulisse range of products can be found on their website.

Romeo_Nightfall
Good news - as ikeas solution is not really mature and with a lot of bridges and stuff.
Score: 2 Votes (Like | Disagree)

I’d pick up at least a half dozen of these, if not more. If they’re priced right.

I don't think so, not yet. Look at the details.
All that's actually being announced is the smart motor. That's a start, but most people don't want to go to the hassle of either retrofitting that to existing blinds, or trying to figure out new blinds with which to pair it.
(Compare with MySmartBlinds which will, similarly, sell you a separate motor kit for existing venetian or roller blinds.)

What almost all people want is a total solution.
- Ikea wins there (modulo the total pain in the ass of their radio system and the awful incompetence of all the documentation surrounding it.)
- MySmartBlinds wins IF you buy their total Venetian Blind solution (Bluetooth only, no HomeKit support). Their RollerBlind solution seems inferior to Ikea in every way (not least that they never sold me one because they kept promising it wasn't available quite yet but soon would be).

I think even after these launch, we will need to wait at least six months for someone to come up with the total solution (ie pair and package them with appropriate blinds). By then will Ikea have got their act together wrt Thread? Will MySmartBlinds? Who knows...
Score: 1 Votes (Like | Disagree)

Roller blinds with WiFi and batteries - so everyone can install it?

Once you run a cable, you can just as well use the same cable to control the blinds. WTF?

it would be optimal for rentals. The big issue would be window compatibility. Regular blinds can be adjusted to fit whatever size window you might now have, but these smart blinds are typically built for one size.

* where I live rentals do not include hardware on windows and rental turnover is just over two years.
Score: 1 Votes (Like | Disagree)

mark-in-mk
"Interior Window Coverings" ! A Marketing departments answer to "What shall we call our blinds ? "
Score: 1 Votes (Like | Disagree)

CJ Dorschel
This is a much welcomed game changer. Currently, smart shade motors are bulky and unless you have electrical work done to power a room they require batteries that don’t last long and result in a large valence. I have solar shades on a Control4 system in Berlin but would love to integrate my shades with HomeKit. The only smart shade offerings Stateside Shades by Lutron and IKEA has entered the market. most need custom sizes which IKEA doesn’t offer. I priced out a few simply solar shades on Serena’s site and was floored - a simple 44” x 36” picture window came out to $700 with a motorized battery powered valance. I already have the Lutron Smart Hub Pro.

I know it’s a first world problem but shades can help reduce energy costs and I know quite a few who have been interested in getting smart shades but have held off until improvements in smart home tech can make the motorized mechanism smaller and more energy efficient while cutting costs.

are we that lazy?

No we’re that forward looking.
Score: 1 Votes (Like | Disagree)
Read All Comments

Tuesday May 11, 2021 10:56 am PDT by Juli Clover
The Connectivity Standards Alliance, which includes major tech companies like Apple, Amazon, and Google, today announced the launch of "Matter," a new interoperable, secure connectivity standard designed for smart home devices. Formerly known as "Project CHIP," Matter is a unified IP-based connectivity protocol that will be used to build and connect Internet of Things ecosystems. It is...
Read Full Article • 122 comments

Thursday May 27, 2021 11:22 am PDT by Juli Clover
Kia today announced that the first 1,500 customers who purchase a 2022 EV6 First Edition are eligible for a free Apple Watch, EV charging credits, or an at-home EV charger. As highlighted by CNET, Kia is offering the free Apple Watch to help new EV6 owners access the Kia Connect services that are bundled with the vehicle. The EV6 is Kia's first pure electric crossover SUV with a 77.4kWh...
Read Full Article • 113 comments

Thursday March 4, 2021 6:00 am PST by Juli Clover
Eve today announced that it is bringing its popular Thread-enabled version of the Eve Energy to the United States, debuting the new Eve Weather with Thread and introducing Thread firmware for the second-generation Eve Aqua. Eve has been investing in Thread like other HomeKit accessory makers, and has now unveiled several Thread-powered devices. As an always-on device, the Eve Energy US with...
Read Full Article • 31 comments

Thursday April 1, 2021 6:00 am PDT by Juli Clover
Eve today announced the availability of Thread support for the second-generation Eve Aqua, which is now available through an Eve Aqua firmware update. The Eve Aqua, for those unfamiliar, is a smart water controller that attaches to any outdoor faucet, adding smart functionality and irrigation controls to sprinklers and hoses. Eve has been working to update all of its Bluetooth-compatible...
Read Full Article • 29 comments