Following the HomePod mini announcement at Tuesday's Apple event, The Loop's Jim Dalrymple has answered a key question many people have been asking: Can you pair a ‌HomePod mini‌ with an original HomePod to make a stereo pair? 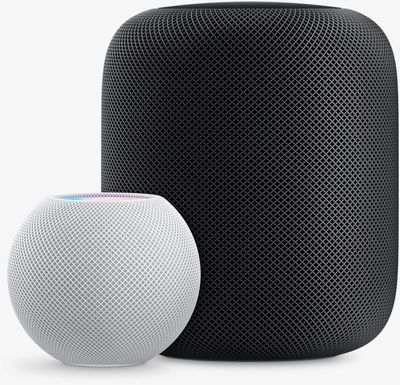 That's not to say the two devices can't be used together at all, however. Dalrymple goes on to explain that if you have a HomePod and ‌HomePod mini‌ in the home, they can be used to play your music in different rooms. Apple's new Intercom feature will also work on both devices.

Dalrymple says an update is on the way for the original HomePod that will add many features that are coming with the ‌HomePod mini‌, including Intercom, personal update, Maps continuity, multiuser support for Podcasts, and support for third-party music services like Pandora and Amazon music.

In another notable tidbit, he says an additional upcoming feature exclusive to the original HomePod will add "an immersive home theater experience when paired with an Apple TV 4K."

To get the 5.1, 7.1 surround, and Dolby Atmos, you need to pair one or two HomePod speakers to the Apple TV. This feature requires the spatial sound support of HomePod, so it isn’t available for the HomePod mini.

farewelwilliams
that's like wearing an AirPod on the left and an AirPod Pro on the right. of course you can't pair them.
Score: 42 Votes (Like | Disagree)

mike...
Why would anyone have thought it would be possible to pair two speakers of vastly different sizes and capabilities? The full size HomePod would completely drown out the HomePod mini. Of course you can't stereo pair them.
Score: 17 Votes (Like | Disagree)

So basically you can buy 5 Homepod minis and create a 5.0 surround system? Thats kinda neat in a sense.

HomePod minis can only stereo pairing or multi-room audio.
Score: 14 Votes (Like | Disagree)

So, you won’t be able to pair them up or what?

My hope however was to be able to pair two of these as rear surround speakers with the HomePod to the Apple TV 4K. This would be the closest solution to my dream HomePod Sound Bar product that I’ve been wishing for.

Disappointing it can’t yet, but I’m still very interested to hear this upcoming ‘home theater’ support for the original HomePod.

Also, who knows what other options could be unlocked via software updates...
Score: 13 Votes (Like | Disagree)

WiseAJ
Well that sucks. There goes my plan of getting a mini to go with my regular HomePod.
Score: 10 Votes (Like | Disagree)

To get the 5.1, 7.1 surround, and Dolby Atmos, you need to pair one or two ‌HomePod‌ speakers to the ‌Apple TV