Apple shipped approximately 15 million iPhones in the United States in the second quarter of 2020, according to a new report shared by Canalys, setting a new domestic record. 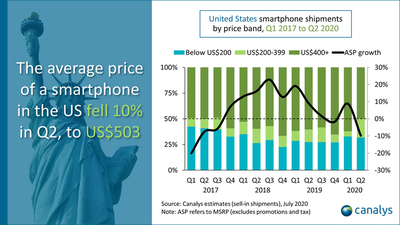 Vendors shipped 31.9 million smartphones in the United States in total. This represents a 5 percent year-on-year decline, but an 11 percent quarter-on-quarter increase. The reopening of manufacturing facilities in China at the end of March and retail stores reopening in May and June were key contributors to growth. Around 70 percent of smartphones shipped in the U.S. in the second quarter of 2020 were made in China, up 60 percent from the last quarter.

5G adoption was low in the second quarter of 2020, but is expected to increase as more 5G-connected devices come to market in the coming months. Apple is expected to contribute to this drive for 5G adoption with the release of 5G-enabled iPhones this fall.

"As the coronavirus pandemic forced consumers to stay at home, 5G adoption in the U.S. failed to take off. Store closures and virus fears limited interaction with demonstration models, tight consumer budgets further constrained spending power, and with scarce 5G network coverage in American suburbia, consumers saw plenty of reasons to buy a 4G device instead," Canalys Analyst Vincent Thielke said. "Despite the lackluster 5G roll-out so far, strong carrier marketing in coming quarters will be instrumental in catalyzing a multi-year transition period from LTE to 5G."

Canalys also noted the "perpetual state of uncertainty" hanging over smartphone vendors due to an escalation of tensions between the U.S. and China, but explained that this largely does not affect Samsung and LG.

"The worsening relationship has resulted in extreme instability that has global onlookers eagerly awaiting November's presidential election. This may guide the U.S.-China trade war into a new phase of détente – or reignite flare-ups," Thielke explained.

Apple and Samsung together account for seven out of every 10 devices sold. The average price of a smartphone in the U.S. dropped 10 percent compared to last year, down to $503. Canalys found that distributors are increasing orders for ultra-low-end Android smartphones from lesser-known brands, such as Unimax and Wiko. Google and other Android brands are increasing their exposure to the low-end and mid-range segments, and in addition to the success of ‌iPhone SE‌, it appears that the sub-$400 segment is poised to gain more prominence.

swm
apple was considered as a luxury item, but more and more people realise that it’s price is associated with the value of experience. that’s a solid ecosystem they’ve built. and the rest of the market/competition is nowhere to be seen.

and also kind of a drug after the first purchase :-)
Score: 11 Votes (Like | Disagree)

djcerla
With Google seemingly losing all interest in Android, the iPhone has only started its new leg of growth.
Score: 6 Votes (Like | Disagree)

Mr. Dee
I have thought about the scenarios of switching to Android. For me, it makes absolutely no sense. First, I am too deep in the Apple ecosystem. I love how I can take calls on my Apple Watch in the kitchen while preparing my meals, count my steps on my way to work, get notifications at my desk while phone is locked away and even respond to them.

Then there is the syncing and cohesiveness between my iPhone, iPad and Mac. It’s just too good, right now, I’m on the brink of subscribing to iCloud storage just to get the added benefit of having my photos and other stuffed properly synced. Finally, the user experience; there is a DNA in Apples culture that Steve Jobs has certainly left behind that is really being self actualize with each product. It’s simple, I describe it as doing as what was thought to be impossible.

There are some things I can’t even explain that the Mac does, that I just don’t understand why Windows has not grasped in all its years of existence.

Oh, and Apple support for their devices is way much longer than.
Score: 4 Votes (Like | Disagree)

LeeW
No surprise with the SE being a good seller as anticipated, which is a good thing, the more customers, the more developers will create and so on.
Score: 3 Votes (Like | Disagree)

macduke
Gotta spend that COVID cash! This explains why all the local shops are still going out of business and laying off people.
Score: 1 Votes (Like | Disagree)

I7guy
If these guesstimates are to be believed great news for Apple.
Score: 1 Votes (Like | Disagree)
Read All Comments

Monday January 24, 2022 10:15 am PST by Juli Clover
A number of developers are upset with an increasingly problematic iCloud server issue that is causing some apps that have implemented iCloud support to fail to sync properly. As outlined on the Developer Forums and on Twitter, there are CloudKit connectivity issues that have been occurring since November. Some users of apps that have iCloud support built in are seeing the following message:...
Read Full Article • 154 comments