According to Apple, a "very small percentage" of 2016 13-inch MacBook Pro displays can exhibit vertical bright areas along the bottom of the screen or a backlight that malfunctions entirely. 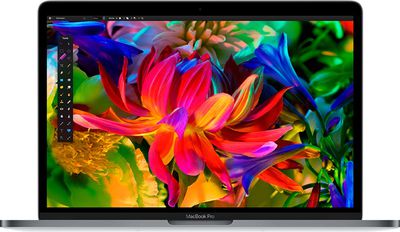 Apple will repair affected devices, which includes machines sold between October 2016 and February 2018, for free. Eligible models are listed below:

No other MacBook Pro models are included in the repair program at this time.

There have been ongoing complaints from MacBook Pro owners about uneven backlighting, though reports have covered machines beyond the 13-inch 2016 MacBook Pro. There has been speculation that the problem is caused by a delicate and easy-to-break flex cable.

Apple says that those with affected machines should find an Apple Authorized Service Provider, make an appointment at an Apple Retail Store, or contact Apple Support to arrange a mail-in repair.

The Backlight Service Program will be available to MacBook Pro owners for four years after the first retail sale of the unit, or two years from May 21, 2019, whichever is longer. According to internal Apple repair documents, displays with a confirmed backlight issue are eligible for LCD replacement at no charge, including displays that have accidental damage.

sunapple
Does the 13" non-Touch Bar have the all-time highest number of service programs? :eek:

Tofupunch
i wonder if they're going to fix this with the exact same part. which means the issue is bound to occur again.
Score: 9 Votes (Like | Disagree)

Ugh. Why does everything have to be "something-gate"? How about just naming it accurately and descriptively?

Maybe if Apple were proactive about addressing design failures and didn't have to be shamed or threatened into doing so, these issues wouldn't be considered cover ups.
Score: 8 Votes (Like | Disagree)

Last week i noticed what appeared to be the stage lighting issue. I closed my lid, went to lunch, and when I returned, no backlight. The warranty ran out on my computer about 3 months ago. So I call Apple tech support, they take some information and eventually refer me to a local Apple store. I take it in, they take a look and tell me that the repair was going to be almost $800. I politely argued that this issue is affecting a larger population than they are acknowledging and ended up arguing my case to the store manager. I had lots of evidence that this issue is a wider issue than just the occasional failure and in the end the manager agreed to have it repaired at Apple's expense.

I'm extremely grateful for the manager and technician at the store level taking pity on me and helping me out. I'm furious with Apple for continually releasing substandard products and treating it's loyal consumers like they are crazy when they complain about hardware failures. I shouldn't have had to argue my case as strongly as I did for an issue that they clearly are aware of.
[doublepost=1558464734][/doublepost]

and 2017 models as well. And I'm hearing some anecdotal evidence that the 2018s are also having this issue. Sometimes the quest for thinner/lighter laptops trumps functionality.
[doublepost=1558464793][/doublepost]

4 weeks ago I closed my computer, reopened it and no backlight. The screen was on but went dim and so did the keyboard back light. Out of warranty and cost me $500. Any idea of this is what’s being covered?

If I were you, I'd go back to the Apple store and lobby for a refund.
Score: 8 Votes (Like | Disagree)

4 weeks ago I closed my computer, reopened it and no backlight. The screen was on but went dim and so did the keyboard back light. Out of warranty and cost me $500. Any idea of this is what’s being covered?

Just called and they issued me a full refund!
Score: 6 Votes (Like | Disagree)
Read All Comments