The Glass Enterprise Edition 2 looks more like a traditional pair of glasses than a futuristic headset thanks to safety frames designed in partnership with Smith Optics, but for those who don't need safety glasses features, there's also a standard version that looks like the original. 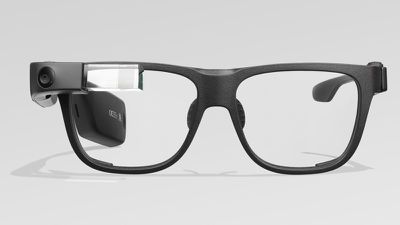 Both versions feature a 640 x 380 Optical Display Module that displays augmented reality content over the real world view, while also offering up a smart voice assistant for getting tasks done.

Google Glass 2 runs Android Oreo, which is meant to make it easier for businesses to develop for and deploy.

The new version of Google Glass is priced at $999, down from $1,599 for the original version, and like the prior Enterprise Glass option, it is not available directly to consumers.

Google originally released Google Glass in 2013 as a mass market product, but it wasn't well-received due to privacy and functionality concerns. Google then relaunched it as an Enterprise product for businesses in 2017, with the redesigned version available as of today.

Apple is rumored to be working on its own augmented reality smart glasses, which could be somewhat similar in design to Google's version. Apple has had AR smart glasses in development for several years now, and rumors have suggested we could see a launch in 2020.

coolfactor
People can bash this all day long, but that's a shallow perspective. What they fail to realize is how this type of development moves the needle forward. Technology improves, lessons are learned, and one day, the world will be a better place as a result. So, bash all you want, but let's be thankful that Google is "wasting their time on this". 10 years from now, you won't see it that way.
Score: 27 Votes (Like | Disagree)

yossi
they're really doubling down on this nonsense
Score: 15 Votes (Like | Disagree)

Baymowe335
Another hardware failure from Google.
Score: 14 Votes (Like | Disagree)

mi7chy
Because of dumbsumers the rest of us don't get nice things since this is now sold to enterprise only. This hands-free HUD tool which is less bulky and more affordable than HoloLens 2 would be useful for a lot of consumer applications such as learning, car repairs, electronic maker hobby, cooking, etc.

rom3o
AR has great potential in manufacturing and logistics (and probably other fields as well, but this is where I come from). Hence it is a product for enterprise customers, it’s literally in the headline of the article.
Score: 12 Votes (Like | Disagree)

My first instinct hearing this: they hear internal rumblings at apple about them being close to production for THEIR ar headset so they want to get ahead of them

"Edition 2". Some of you guys are so drowned in the pro Apple world you don't even know what's going in the tech world. Please stop commenting on technology if you have a one track mind.
Score: 9 Votes (Like | Disagree)
Read All Comments