There's a vertical camera cutout, suggesting the iPad mini 5 might have a camera arrangement similar to the iPad Pro with a rear flash, and a center microphone cutout. 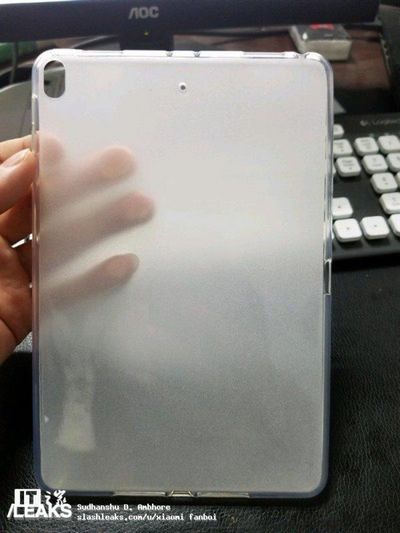 Speaker cutouts at the top and the bottom hint at a possible four-speaker arrangement, and there appears to be a cutout for a headphone jack at the top.

There is also a cutout at the side, which could mean the iPad mini will get a Smart Connector to support a Smart Keyboard, much like the iPad Pro.

Aside from these details, not much can be gleaned from the case, and we have no way to verify if it's actually a case designed for a fifth-generation iPad mini.

While we have heard rumors suggesting Apple is indeed working on an iPad mini 5, none of these rumors have included much detail on what new features might be added to the 7.9-inch tablet.

It makes sense that Apple would add a feature set that would bring its smallest tablet in line with the sixth-generation iPad at the very least, however, and it could also adopt a few features from the iPad Pro. We can expect an upgraded processor and a lower-cost display panel, according to reliable Apple analyst Ming-Chi Kuo.

We don't know when the new iPad mini will debut, but recent rumors have suggested Apple will release it in the first half of 2019 to revitalize flagging iPad sales.

AngerDanger
Kinda hard to gauge how legitimate this leak is with it being such a large and crisp photo. Don't worry, though, I can attempt to enhance it.

TheShadowKnows!
This is one I will queue-in on day one.
Love my two iPad Mini4s used purely for consumption, and for trips across the pond.

This and a pair of iPhone SE2s will round up nicely my post-Christmas shopping of things Apple.
Not that Cook deserves it/s
Score: 12 Votes (Like | Disagree)

name99
Please, when you give us the news, or rumors, don't give us nonsense commentary. There's enough of that on the rest of the internet.
"to revitalize flagging iPad sales."

Have iPad sales been flagging?
Well, look at the graph:
https://www.statista.com/statistics/269915/global-apple-ipad-sales-since-q3-2010/

The product will be released in improved form because there is a demand for it, not because "iPad sales are flagging".
Score: 9 Votes (Like | Disagree)

Sasparilla
This is great to see for all the mini fans, it’s been a really long time.
Score: 9 Votes (Like | Disagree)
Read All Comments