In just a few weeks, Lisa Brennan-Jobs will launch "Small Fry," a memoir about her life that includes a focus on the tumultuous relationship she held with her father, Apple co-founder Steve Jobs. As the book launch grows closer, Brennan-Jobs is in the midst of a publicity tour and today her latest interview has been shared by The New York Times, which also provides a few snippets from the book.

Naturally, much of Brennan-Jobs' overview of her childhood includes numerous passages regarding her father's "coldness." Still, the author doesn't want "Small Fry" to be regarded as a tell-all about Steve Jobs, but as more of a "nuanced portrait of a family," as well a book about her own story and not her father's. 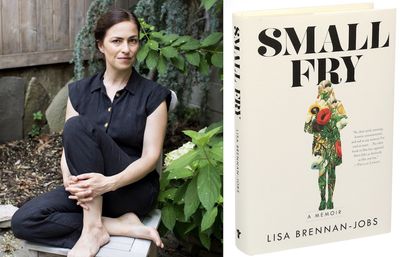 Images of Lisa Brennan-Jobs and Small Fry via NYT
Brennan-Jobs says she began work on what would eventually become "Small Fry" in 2011, not long after Jobs passed in October of that year. She returned to Silicon Valley over the years, interviewing her family, her mother's ex-boyfriends, and Jobs' own ex-girlfriend. In an effort to ensure she'd finish the book on her own terms, she took a 90 percent cut in her book advance and switched from Penguin Press to a smaller publisher named Grove.

Brennan-Jobs focuses much of the memoir on her parents, and her mother Chrisann Brennan has already read the book:

Her mother, Ms. Brennan, is portrayed as a free spirit who nurtured her daughter’s creativity — but could be mercurial, hot-tempered and sometimes neglectful. “It was horrendous for me to read,” Ms. Brennan said in an interview. “It was very, very hard. But she got it right.”

Ms. Brennan said that her daughter has, if anything, underplayed the chaos of her childhood. “She didn’t go into how bad it really was, if you can believe that,” she said.

She also recounts numerous instances when her father would "frequently" use money to "confuse or frighten her," during the years when he claimed paternity:

Ms. Brennan-Jobs describes her father’s frequent use of money to confuse or frighten her. “Sometimes he decided not to pay for things at the very last minute,” she writes, “walking out of restaurants without paying the bill.” When her mother found a beautiful house and asked Mr. Jobs to buy it for her and Lisa, he agreed it was nice — but bought it for himself and moved in with his wife, Laurene Powell Jobs.

Brennan-Jobs also recounts "moments of joy" that she had with Jobs, stating that ultimately she has forgiven her father, and her goal is that she wants the reader to forgive him too:

But “Small Fry” also contains moments of joy that capture Mr. Jobs’s spontaneity and unparalleled mind. When Ms. Brennan-Jobs goes on a school trip to Japan, he arrives unannounced and pulls her out of the program for a day. Father and daughter sit, talking about God and how he sees consciousness. “I was afraid of him and, at the same time, I felt a quaking, electric love,” she writes.

Triumphantly, she loves him, and she wants the book’s scenes of their roller skating and laughing together to be as viral as the scenes of him telling her she will inherit nothing.

“Have I failed?” she asked, in one of our conversations. “Have I failed in fully representing the dearness and the pleasure? The dearness of my father, and the outrageous pleasure of being with him when he was in good form?”

According to Brennan-Jobs, her father did grant her a "movie ending" by apologizing to her toward the end of his life for not spending more time with her, disappearing during her adulthood, forgetting birthdays, and not returning phone calls. She recalls the moment, stating that Jobs claims he acted the way he did in her adulthood because he was offended that she "didn't invite" him to a matriculation event at Harvard during her first year. He ultimately stated "I owe you one."

"Small Fry" will be available to buy on September 4, and you can read more from The New York Times' interview with Lisa Brennan-Jobs right here.

When her mother found a beautiful house and asked Mr. Jobs to buy it for her and Lisa, he agreed it was nice -- but bought it for himself and moved in with his wife, Laurene Powell Jobs.

Was this already known? That's probably the most horrible Jobs' anecdote I've heard yet.
Score: 53 Votes (Like | Disagree)

_Refurbished_
Jobs was an ass. He’s one of those troubled people that probably figured it out all too late.

He could change the world, but his most important relationship was a failure. Reminds me of Citizen Kane.
Score: 29 Votes (Like | Disagree)

Was this already known? That's probably the most horrible Jobs' anecdote I've heard yet.

Agreed. Any idolization I had for this man just completely evaporated.
Score: 18 Votes (Like | Disagree)

That surprised me, too. Steve Jobs was a tortured soul. I'm happy for his daughter able to make peace with what must've been a traumatic childhood.

Very True. Reading many books on Steve including the official bio, it was clear he was always bitter towards being adopted especially early on. Maybe it was his way of sadly "paying someone back" for he himself not being wanted by his biological parents. Amazing yet no surprise how things that happen so early in life have a lasting impact.

Makes me think when I hear and see the things parents say and do around their children how negatively it will impact them later. In the big picture there are millions of people (who aren't necessarily bad people) who have no business being parents. For example Steve was a genius with products but clearly had a lot to be desired in the parenting department.
Score: 17 Votes (Like | Disagree)

Lisa's Mom was still gold-digging Steve. (asking to buy them a house)

Not really unreasonable. Asking a man to provide the same standard of living to his daughter that his other children enjoy.
Score: 15 Votes (Like | Disagree)

Porco
I wouldn't even begin to pretend to know Steve Jobs like she did, of course, but it does strike me that the contrasts of love and devotion with a feeling of cold detachment and bewilderment perfectly encapsulates the feelings I (and maybe many of us?) have with Steve Jobs' work in a weirdly parallel (if more minor) way to Lisa's relationship with her father.

I'm sat here typing this post on a computer keyboard I love, attached to a computer I love, with an iPhone I love, all basically (largely) designed under Steve Jobs' leadership. And yet so many decisions he made about Apple's products infuriated me then, and still do to this day.

But I still feel a kind of bond to these rapidly-ageing products... no, not the closer bond of an actual familial relationship of course, but still a human-to-technological relationship that Steve Jobs had so much to do with. One that makes it worth persevering with, because the alternatives (whether from rivals or indeed post-Jobs Apple to some extent) just seem less rewarding.

Maybe in some ways, Woz was the mother of Apple and Steve Jobs was the Father of Apple. And so I guess this all a long-winded way of saying I feel a strange kind of empathy with Lisa Brennan-Jobs, (beyond basic decent humanity) albeit from a much less important perspective.

Anyway, it sounds like an interesting book, I may well read it at some point.
Score: 14 Votes (Like | Disagree)
Read All Comments