Disney's free Movies Anywhere service is expanding thanks to partnerships with Fox, Sony Pictures, Universal, and Warner Bros, allowing customers who purchase movies from services like iTunes and Amazon Video to watch all of their content in one place using the Movies Anywhere apps.

Disney has been using Movies Anywhere for Disney, Marvel, Pixar, and Lucasfilm titles since 2014, but now the available content library has greatly expanded. The new Movies Anywhere service replaces the existing Disney version. 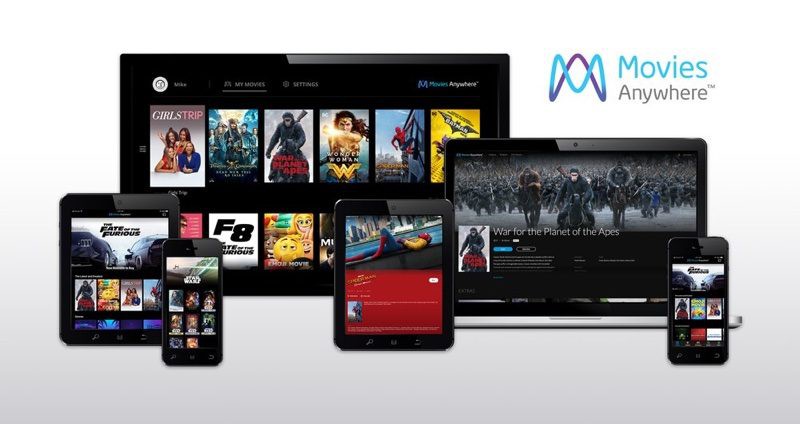 With a Movies Anywhere account, Movies Anywhere content purchased from Google Play, Amazon Video, iTunes, and Vudu can be accessed the service. It can also be used for digital content that comes alongside physical copies of DVDs or Blu-Rays so long as they're from Disney or one of its partner studios.

There are Movies Anywhere apps for the Apple TV and iOS devices, and the service is limited to the United States at the current time.

While most movie studios are on board, allowing users to watch more than 7,300 titles, Paramount and Lionsgate have yet to sign up.

Users who sign up for Movies Anywhere and connect their accounts with one digital retailer can get access to Ice Age and Ghostbusters (2016) for free. With two accounts added to the service, users can also get access to Big Hero 6, Jason Bourne, and The Lego Movie at no cost.

farewelwilliams
Situation:
There are 14 places to watch videos

14?! Ridiculous! We need to develop one universal place to watch videos

Situation:
There are 15 places to watch videos

seriously though, I wish they did this with games. i must have bought grand theft auto 5 at least 3 times already.
Score: 9 Votes (Like | Disagree)

The last three movies I purchased had digital copies which were only available on Vudu. Pissed me off. I want my whole collection on Itunes so it's on all of my devices. Called the company, they said they're sorry, but I can stream it anywhere. I asked how that worked on planes. Crickets.

If they're going to make up a million services to store our digital media, at least have reciprocal agreements with all of the others so we can each use the service most convenient to us. In the meantime, I won't be buying any movies from WB or Sony again.

Did you not read this post? This is the point of Movies Anywhere you can watch any purchased movie from all of the participating libraries. Link your Vudu and iTunes and then you can just download the movie from the iTunes store on your device.
Score: 5 Votes (Like | Disagree)

Right, it does NOW, but this sounds like it will be yet ANOTHER app to go to. Movies should just be in your library, but I doubt it will be that way.

Right you have to download the app or go to the website first and set up and link all of your accounts. But after that any movie you purchase at VUDU, Amazon, Google, or iTunes will just be in your purchased history for each retailer. So you can go into your purchased section in iTunes and see something you purchased from Amazon. So once you setup everything you don't have to go back to the Movies Anywhere app.
Score: 3 Votes (Like | Disagree)

reallynotnick
Now the real question is what is going to happen as far as 4K/HDR rights between services especially iTunes which upgrades HD to 4K?
Score: 3 Votes (Like | Disagree)

jdillings
This is great news! This means you can buy movies on whatever service you want (Amazon Video, Google Play, iTunes or Vudu) and then watch them on any of the services. For example, buy a movie cheap on Vudu and then have it automatically added to your iTunes account.
Score: 3 Votes (Like | Disagree)
Read All Comments

Sunday May 24, 2020 3:06 pm PDT by Frank McShan
The team behind the "unc0ver" jailbreaking tool for iOS has released version 5.0.0 of its software that claims to have the ability to jailbreak "every signed iOS version on every device" using a zero-day kernel vulnerability by Pwn20wnd, a renowned iOS hacker. The announcement comes just days after it was announced that the tool would soon launch. The unc0ver website highlights how the tool...
Read Full Article • 156 comments

Friday May 22, 2020 7:03 am PDT by Eric Slivka
We've been hearing quite a bit recently about Apple's long-rumored over-ear headphones, said to be called "AirPods Studio," and it looks like a launch may be coming in the relatively near future. Artist mockup based on Beats Studio3 Rumors have generally suggested a summer or fall launch for AirPods Studio, with a report earlier this week claiming that suppliers in Vietnam will begin...
Read Full Article • 82 comments

Monday May 25, 2020 2:53 am PDT by Tim Hardwick
Apple is reportedly looking to integrate light sensors in a new model of AirPods in the next couple of years, according to a new report today, suggesting their use could be part of rumored upcoming health monitoring features in the true wireless earbuds. In a paywalled article, DigiTimes reports that ASE Technology could be involved in manufacturing the sensors: Apple is expected to...
Read Full Article • 29 comments

Friday May 22, 2020 4:01 am PDT by Tim Hardwick
Former Apple executive and iOS chief Scott Forstall made a rare public appearance this week at Code.org's virtual Code Break event, and in between classes, Forstall shared the intriguing story of how he was hired by Steve Jobs. Forstall revealed that he had been considering working at Microsoft when he went to interview at NexT, the company started by Jobs after he had left Apple. Forstall...
Read Full Article • 151 comments

Apple Reopening ~100 More Retail Stores in the U.S. This Week With Focus on Curbside Pickup and Storefront Service