Sony today announced a collection of new products that it plans to showcase during the IFA consumer electronics show in Berlin, Germany this upcoming weekend. One of the biggest additions to the company's line-up is a new smart home speaker, called the LF-S50G wireless speaker, which looks similar to Apple's upcoming HomePod, has a built-in Google Assistant, and is being pitched with a "high quality" music-focused message.

Users can start off music playback by saying "OK Google," and from there they can ask the assistant for any information that it normally provides, including basic trivia, unit conversions, nutritional information, recipes, and more. The sides of the speaker have an LED clock display, while the top includes various sensors that support gesture controls for starting a song, skipping a song, and adjusting volume.

"Now you can get Sony’s awesome sound quality and design with the Google Assistant built-in," said Mike Fasulo, President and COO of Sony Electronics. "This functionality is another example of Sony’s commitment to customer choice by delivering new and innovative technologies."

The LF-S50G wireless speaker includes a 360 degree, vertical two-way facing speaker system, which Sony said provides for "maximum sound coverage" in any average-sized room. The device's full range speaker reproduces vocal and treble notes, while a dedicated subwoofer reproduces bass sounds and an omnidirectional two stage diffuser evenly spreads the sound to anyone in the room. For music playback, the speaker supports smartphone pairing through Bluetooth and NFC.

Sony is billing the device as a kitchen assistant thanks to its included clock and timer functionality, as well as its IPX3 splash-proof design and a water repellant surface. Users will also be able to control connected smart home electronics, and connect other supported Sony wireless speakers that have Chromecast built-in, syncing the same music across multiple speakers in one home. The LF-S50G wireless speaker will cost $199.99, and Sony said that it will go on sale this October.

Sony also revealed a trio of new wireless headphones that are coming to the 1000X family of products, each bringing advanced noise cancellation features for users. The collection includes the "truly wireless" WF-1000X with an in-ear design, the WI-1000X with a behind-the-neck design, and the WH-1000XM2 with an around-the-ear design and more sound options to adjust to various noise levels and environments. The WH-1000XM2 headphones are the newest versions of the MDR-1000X from last year.

The first device, the WF-1000X, is similar in functionality to many wireless headphones on the market, like Apple's AirPods. When taken out of the included charging case, the earbuds automatically connect to the user's smartphone, and Sony said that the case allows users to listen to nine hours of music on the go. In terms of price, the WF-1000X earphones will cost $199.99, the WI-1000X will cost $299.99, and the WH-1000XM2 will cost $349.99, and all three devices launch in September.

For more information on Sony's announcements, check out the company's IFA-focused press release here. One of the other notable unveilings centered around three new Xperia smartphones coming this fall, with a flagship feature called the "3D Creator." Sony described this as its in-house solution for 3D object scanning that allows users to create avatars, play with augmented reality camera effects, set a live wallpaper, send to friends as a sticker on social media, print on a 3D printer, and various other AR-related options.

That home speaker looks familiar... especially in those 2 exact colours...

They both look like the Whyd speaker, which was even announced before the HomePod.

I'm glad the HomePod has a wider and sturdier base.

That's not an egg. This... this is an egg.:D
/procedes to cut sshambles jacket to ribbons 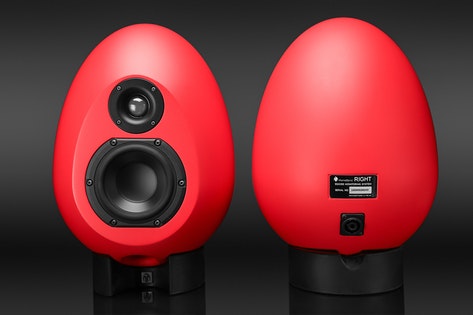 They both look like the Whyd speaker, which was even announced before the HomePod.

I'm glad the HomePod has a wider and sturdier base.
Score: 1 Votes (Like | Disagree)
Read All Comments