Apple today updated its investor relations page to announce that it will share its earnings for the first fiscal quarter of 2017 (fourth calendar quarter) on Tuesday, January 31.

The earnings report will take a look at iPhone 7 and iPhone 7 sales throughout the holiday quarter, as well as sales of the new MacBook Pro that was introduced in October. 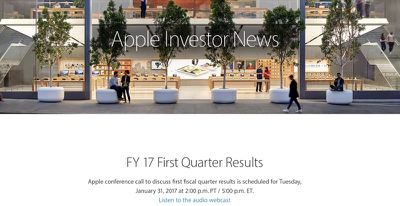 Apple's guidance for the first quarter of fiscal 2017 includes expected revenue of $76 to $78 billion and gross margin between 38 and 38.5 percent. Based on Apple's estimates, Q1 2017 will mark Apple's return to growth following its first annual revenue decline since 2001.

stukdog
I don't even want to hear about the fabled "product pipeline" this time around.
Score: 16 Votes (Like | Disagree)

The past "pipeline" contained the AirPods, for example, a completely unexpected mega-hit that will fuel further growth.
[doublepost=1483569298][/doublepost]

In 6 years of TC's robotic repetition that Apple has a great product pipeline he was able to come out with ONE truly buzz worthy product -- AirPods. Meanwhile he's practically gutted the Mac line -- its peripherals for sure. The iPad has gets no love, just price hikes. All TC and Shiller can say about it is that it's magical and PC users should buy one. Samsung has pretty much caught up with the iPhone feature-wise, and but-for it's battery woes, it would have likely stifled iPhone sales even more than they already were because, well, Apple has made the iPhone boring and its models irritatingly gimpped unless you want the largest screen.

AppleWatch had promise but TC was hypnotized by Ive's insistence it could be the next Cartier for the Rich And Famous and Fashionista crowd by covering it in gold and doing nothing more. This even as it was clear the real market was fitness -- not just faux step counting, but actual sports data monitoring and collection. It took Apple how long to incorporate GPS into the watch? Meanwhile Garmin just announced some fantastic new Fenix models that surpass AW's sports functions (they alway did) but also look like real watches, not an oversized piece of Chiclet gum.

Seriously -- TC's signature mark on Apple thus far is paying a lot of money for a headphone company and its top executives and then still not being able to negotiate a TV streaming deal for AppleTV -- the most expensive non-4K streamer on the market today and with limited Siri commands.

So please, stop telling us how great Apple is under TC's tutelage until he starts actually releasing amazing, interesting products en masse from this so called vast product pipeline, not one ever 6 years.
Score: 5 Votes (Like | Disagree)

pat500000
Seriousness....I would like to hear something about Mac desktop as in Mac Pro and minis.
Score: 5 Votes (Like | Disagree)

Seriousness....I would like to hear something about Mac desktop as in Mac Pro and minis.

You're assuming that Apple respects it's consumers to do so.
Score: 4 Votes (Like | Disagree)

"We had the Courage to can them"

I really hope somebody grills him on why they've let their entire Mac desktop lineup completely languish on the vine ever since Cook became CEO but I seriously doubt anyone will. Not that I would expect Cook to respond with anything other than obfuscation & platitudes...