Facebook-owned WhatsApp today announced the launch of a desktop app for Mac OS X, allowing users to easily carry on their conversations from their computers natively. The move comes several months after debuting a web version of its popular chat service. 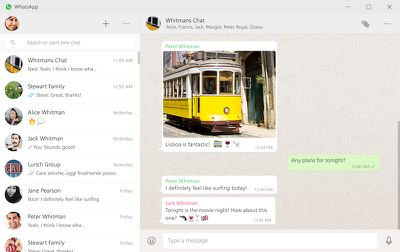 Today we're introducing a desktop app so you have a new way to stay in touch anytime and anywhere - whether on your phone or computer at home or work. Like WhatsApp Web, our desktop app is simply an extension of your phone: the app mirrors conversations and messages from your mobile device.

The new desktop app is available for Mac OS 10.9 and above and Windows 8 and supports native desktop notifications, keyboard shortcuts and more. The app also syncs to users' mobile devices, which means that notifications and conversations are mirrored in the desktop app.

To download the free app, WhatsApp users have to go to whatsapp.com/download from their desktop browser. Once the app is downloaded, users will be presented with a QR code. To scan the code, users will have to use the WhatsApp app on their phone, going into the app's settings and clicking "WhatsApp Web" to activate the QR code scanner.

farewelwilliams
2 years too late. i already moved on to telegram
Score: 13 Votes (Like | Disagree)

Mr. McMac
I don't do facebook nor whatsapp. I think Zuckerberg is a complete as*hOle POS.
Score: 9 Votes (Like | Disagree)

now i see it
I guess they've never heard of email.

2 years too late. i already moved on to telegram

I agree, I love Telegram. Arguably though if all parties have updated their Whatsapp app, and you have encrypted your phone, Whatsapp is more secure than Telegram.

This. It's crazy how they can be backed by so much money and still need that long to port their messenger (which is really not among the most complex software out there) to desktop systems.

Because they didn't port it to the desktop really, the database is still on your phone. My guess they were trying to decide on the best way to handle the data.

Really? To use the app you have to scan a QR code? How silly.

Not really, they only want the phone that has your WhatsApp installation to be authorizing a computer's webversion or in this case desktop version of Whatsapp. Thus your phone needs a unique identifier for a particular instance of Whatapp mirroring, and rather than have you type in a weird string of characters, you can achieve the same results with a quick scan of a QR code.

Hey, are your emails encrypted? Did you know that not even Facebook can read your messages? It seems when morons like you hear Apple say "your iMessages are encrypted" you're ready to believe, but when another company says it you're ready to call its users morons and wear the tin foil hat.
[doublepost=1462929478][/doublepost]

I know, right? Telegram has a much better client that doesn't depend on using your phone as a proxy and isn't owned by Facebook. It's like a win win.

It also surprises me that Facebook can't figure out how to implement a proper desktop WhatsApp client. Their own messenger app works fine across multiple devices.

Don't get me wrong, I LOVE Telegram and have been converting my friends over the past few months. I'm willing to sacrifice a little bit of security/privacy for the convenience, speed and broad availability of Telegram (it's on so many platforms), and yes it is nice that it isn't owned by Facebook.

However Whatsapp is arguably more secure and part of the reason is that phones have to run through your phone, and the only way to ever access the messages is by accessing your phone. Think about it; if you're ever worried about who may be reading your messages, you can just destroy your Whatsapp messages on the phone and any mirroring app will not be able to "recover" the data because it was never actually stored on that mirroring app (be it Chrome or this desktop app).

2 years too late. i already moved on to telegram

I know, right? Telegram has a much better client that doesn't depend on using your phone as a proxy and isn't owned by Facebook. It's like a win win.

It also surprises me that Facebook can't figure out how to implement a proper desktop WhatsApp client. Their own messenger app works fine across multiple devices.
Score: 5 Votes (Like | Disagree)

KALLT
It is basically a Chromium browser wrapped in an application bundle. It is literally the exact same thing as the web.whatsapp.com ('http://web.whatsapp.com') client, only with a Dock icon and separate push notifications instead of HTML5 web notifications. It is also really huge, the app bundle alone is 135 MB(!) big and that does not count the cache that it might create.

When are they going to move everything to the cloud so we can get proper apps for the iPad and the desktop instead of using workarounds like this? It’s frustrating that I still cannot solely use my iPad without fearing some important WhatsApp message might have been sent to my charging iPhone in another room.

Probably never. Their CEO reaffirmed this only recently. They have no ambitions for independent clients.
Score: 4 Votes (Like | Disagree)
Read All Comments