Apple has begun selling official Apple Watch lugs through authorized distributor Avnet that may only be used in third-party bands that adhere to the company's Band Design Guidelines for Apple Watch. Apple-designed stainless steel lugs are each marked with "Made for Apple Watch" laser etching to verify their authenticity. 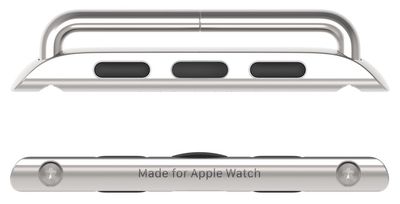 The stainless steel lugs are available in 38mm and 42mm sizes and are compatible with all Apple Watch, Apple Watch Sport and Apple Watch Edition models. However, at the time of publication, Space Gray, Space Black, Yellow Gold and Rose Gold lugs are not listed for sale.

Apple has published Apple Watch Lug Assembly Guidelines that provide accessory makers with step-by-step instructions and a list of required tools for assembly, including a Pentalobe 1.1 screwdriver bit and clamping device. The document also outlines proper screw installation for the lugs.

Supermallet
Still no space grey? Man, us SG users are getting screwed with the Apple Watch.
Score: 10 Votes (Like | Disagree)

These are for wholesale purchases. So Store A buys 25 sets of them, at $11.20 each, and will then sell to the consumer at ~$20 each. These are actually pretty decent prices.
Score: 9 Votes (Like | Disagree)

TechZeke
The lack of reading comprehension and common sense in this thread is disturbing...
Score: 6 Votes (Like | Disagree)

Sunday January 16, 2022 3:37 pm PST by Joe Rossignol
A bug in WebKit's implementation of a JavaScript API called IndexedDB can reveal your recent browsing history and even your identity, according to a blog post shared on Friday by browser fingerprinting service FingerprintJS. In a nutshell, the bug allows any website that uses IndexedDB to access the names of IndexedDB databases generated by other websites during a user's browsing session....
Read Full Article • 202 comments