T-Mobile has announced the expansion of its Simple Global coverage to an additional 20 countries to now cover all of Europe and South America. Simple Global is now available in the Bahamas and 145 total countries worldwide, covering more than 90% of the areas that Americans travel abroad each year. 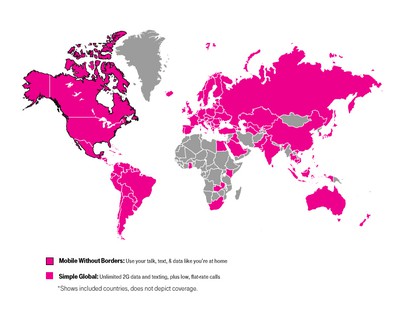 Simple Global provides Simple Choice postpaid customers with unlimited low-speed data and texting at no extra cost, and flat-rate calls for 20 cents per minute, outside of the United States. It is complemented by Mobile Without Borders, which allows full talk, text and 4G LTE data usage in Canada and Mexico at no extra cost.

“We’ve just made your traveling even easier in 20 more destinations around the world, expanding Simple Global to cover all of Europe and all of South America,” said John Legere, president and CEO of T-Mobile. “The carriers have made billions overcharging consumers who just want to stay connected overseas, and we’ve changed all that! Today, we made it even simpler to text, search or keep up on social media in a total of 145 countries and destinations, all at no extra cost!”

Simple Global is now available in these additional countries and destinations:

Simple Global provides a standard data speed of 128 Kbps. No tethering is allowed.

Update: Sprint has also added 33 new countries to Open World, which provides free calling and texting in certain countries and free texting, calls for 20 cents per minute and high-speed data for $30/GB in other countries. The new destinations are listed here and the full list can be found here.

Instead of worrying about global coverage T-Mobile should be concerned with just expanding coverage in their main markets. Minute you step foot in a small town in the US you lose wireless capabilities. I know because I made the drive from Los Angeles to San Francisco and had to carry ATT phone in case of emergency.

Unless your a current subscriber, you have absolutely no room to talk. Your one experience doesn't reflect the rest of us.
Also, if you follow John Legere on Twitter and read his blog posts, you can see how much they have been improving.
The biggest problem is the FCC who seem to favor who has the deepest pockets despite their constant corporate tag line of "preventing monopolys" etc...
Score: 9 Votes (Like | Disagree)

tigres
They just keep going and going....
John's the man. Must be driving Ralph nuts...
Score: 5 Votes (Like | Disagree)

Instead of worrying about global coverage T-Mobile should be concerned with just expanding coverage in their main markets. Minute you step foot in a small town in the US you lose wireless capabilities. I know because I made the drive from Los Angeles to San Francisco and had to carry ATT phone in case of emergency.

Well they're doing that too. These days I can drive through most of the Carolinas, including a lot of small towns, and maintain LTE connectivity. That wasn't the case just a year ago. They've expanded quite a bit.
Score: 4 Votes (Like | Disagree)

Douglas B
Have they only got one color?

Other than that, it does seem simple...
Score: 3 Votes (Like | Disagree)

acgmph
I am currently in Europe for three weeks and having TMo as my carrier has saved me a TON of money, not to mention the added convenience of not having to buy a local SIM. Now add to that free WiFi calling to the US (thank you hotel, Starbucks, and random apartment with open WiFi) and you have the best deal possible.

As for the domestic coverage I will say this: this summer my wife and I traveled America for 40 days going down the east coast to Key West, across the south to San Diego, "locally" to Grand Canyon, Zion, Vegas, San Francisco, down on the CA1, then back to the east coast via Utah, Wyoming, Nebraska... all the way back to Philadelphia. I used my TMo phone (iPhone 6) for navigation and it only started losing native TMo signal (even going for long stretches without any service) in West Texas, so after we passed the Dallas/Austin line going to New Mexico. From there we were in no service country or roaming most of the time if too far off the main highways or towns (US roaming from TMo sucks... you only have 50MB included and you use them up in one address lookup), but hey, we had full TMo coverage pretty much everywhere else (even in Oatman, AZ!). My wife has an iPhone 5 and she had bigger signal issues, so I will definitely get her the 6S to deal with that. Back home in Philly signal strength is great and indoors we have WiFi, so no need. Again, that iPhone 6S will solve her signal issues.

All in all we would not consider any other carrier. TMo is the best deal for us for now, and it's getting better every month.
We can live without fancy rural area coverage.
Score: 3 Votes (Like | Disagree)

Yes, they should continue to improve coverage domestically; I occasionally have issues with that myself when I drive.

BUT and this is a BIG BUT, coverage in other countries is not a gimmick. It has saved me hundreds and it is immensely helpful at times to not have to buy a local SIM card with a different number. It's damn useful to hit the ground running in a foreign country with your data and SMS working immediately. Imagine your same telephone number following you around the globe. What a concept, huh?

Seconded. I'm currently traveling from country to country and both my iPhone and iPad have access to the cell towers without needing to switch SIMs in each and every country. Coupled with wifi calling and I'm able to call, text, iMessage, web browse, and get directions for free. My coverage in the US is also rather good with only a couple pockets where I've had trouble. However, this is usually when I'm in a densely populated area inside a building so I'm thinking the 6S will help in those situations. I must say that T-Mobile coverage was a bit spotty about two years ago, but have had little trouble since. Once I venture out into the sticks, the coverage is much poorer, but I simply roam and have no issues. All of this for $80/month.
Score: 2 Votes (Like | Disagree)
Read All Comments