Facebook's News Feed has gone through a number of changes over the years, with the company attempting to streamline the best way for users to visualize the content they care most about right at the top of the social media site. Today, Facebook hopes to be one step closer to that goal, with the roll out of a new "See First" option to its iOS app that will allow users to choose up to 30 people or fan pages that will automatically appear at the top of their News Feed every time they check the site (via Re/code). 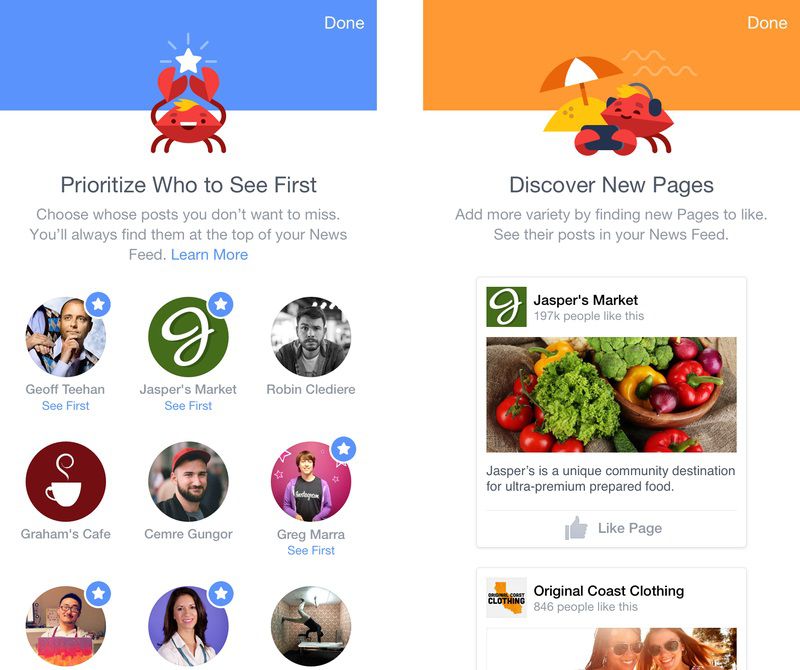 As Re/code reports, Facebook promises that any pages or people added to a user's See First list won't be used to target customers with ads. In fact, Facebook hopes that the more streamlined experience will encourage users to visit the site more often, and perhaps counterbalance the fact that users may generate less ad income for the company thanks to not needing to scroll through the News Feed for as long anymore.

“It sounds counterintuitive, but the worse we do on rankings, the more we make people try and scroll through, the more likely they are to just go away,” a company spokesperson told Re/code. “If we show you the stuff you really really want first, you’ll come back more often.”

The update will present users with possible suggestions for following pages and people when initially beginning the process to set-up a See First list, and also allow users to unfollow friends and pages from within the app, which you could only do on the web in the past. The update for Facebook [Direct Link] will begin rolling out throughout the day today, with the company promising the same features will be coming to Android and the web sometime soon.

TonyC28
I'm kind of sick of Facebook these days, but if they would give me the option to permanently set my News Feed to simply appear in chronological order that would be great.
Rating: 18 Votes

bushido
can they just stop with all this filter crap? just show everything in line of the news feed. one of the reasons i no longer use the app is cuz it always reverts back to the top news bs.

i dont know a single person who uses anything BUT the chronological order. who wants to see stuff from days ago mixed with current events
Rating: 4 Votes

nepalisherpa
What I want is a default option to view every post in a chronological order. Is it really difficult to provide this option?
Rating: 3 Votes

I'm kind of sick of Facebook these days, but if they would give me the option to permanently set my News Feed to simply appear in chronological order that would be great.

I agree, but even with that setting, Facebook still "curates" what you see in a seemingly random fashion.
Rating: 2 Votes

ArtOfWarfare
Also, Facebook appears to have silently introduced a new mascot, seen in the screenshots in the article:

Crab with a tuft of blonde hair.

Crabs with blonde hair definitely makes me think of my friends. I'm glad they have this mascot now.
Rating: 2 Votes

The average user would see over 1500 posts per day if they showed you every update in order. You aren't going to go through all that. Instead they have been surfacing the stuff that's most relevant to you and the stuff you have shown that you like to see the most. Quit pretending you'd be interested in scrolling through all the Pages that aunt Ruth liked just to see your friend's videos.


As it stands, I currently see THE SAME updates multiple times/day because someone made a comment to it. Just show the status updates in chronological order based on the time they were originally POSTED, not based on the last time it was commented on. Its not that hard - that's how they used to do it until they tried to get all fancy which is when people started getting ticked off at FB.
Rating: 2 Votes


Nobody, that's who. Which is probably why they introduced it. It's simply a website for social media, they should remember that and maybe listen to what their users actually want.

The main gripe with Facebook at the moment is the myriad of spam and hacked pages. Plus when you report they're rarely dealt with, and even if one account is deleted then another 10 are setup in that time.

Plus the stream of notifications from 'likes' is irritating, seemingly no way to disable that after they randomly decided to reintroduce that feature. And the fact my comments to pages and stuff are visible to every one of my friends (which I really don't like), yet if a friend clicks it to try and locate them then it won't direct them to the exact comment. So it's utterly useless.

It's a ******** website and I hate the fact that myself and my friends are too invested in it to move to an alternative.
Rating: 2 Votes

TraceyS/FL
I"m beyond tired that each device I use has different stuff. My phone has one set of stories, my iPad another - oh and the computer I'm at most shows none of what the other 2 do.

Let me decide, make "most recent" actually the most recent. Don't make me hate you each time I pick up a different device.I can miss whole DAYS of friends stuff just because i decided to not check it on my phone that day. And notifications aren't consistently notifying.
Rating: 1 Votes

The average user would see over 1500 posts per day if they showed you every update in order. You aren't going to go through all that. Instead they have been surfacing the stuff that's most relevant to you and the stuff you have shown that you like to see the most. Quit pretending you'd be interested in scrolling through all the Pages that aunt Ruth liked just to see your friend's videos.


You don't know me. Yes I would scroll through 1500 posts every day if that's what was on my list. I do it on Twitter. Why not Facebook? What? Because it's more than 140 characters per post?

I don't mind scrolling. Even if it starts at the top and I miss old stuff because it's 3000 posts down the list, I know I missed it because I know the time period that I didn't look at. That falls back on me.

As it is, Facebook is not giving me the option to see chronological, let alone set that as my default view when I login; which is what I want.
Rating: 1 Votes

Wouldn't that just be lovely? Or, IMO better still have old posts reappear as new comments are added, but make them slightly grey or something. Let them stand out as old posts.


Yep, it's like a candle in the wind - unreliable.
Rating: 1 Votes
[ Read All Comments ]