Looking at Apple's quarterly SEC quarterly filing, Katy Huberty of Morgan Stanley believes Apple's revenue is poised to explode in the coming quarters. Huberty based her prediction on increases in Apple's off-balance sheet commitments, which have a historical correlation with revenue growth.

Off-balance sheet commitments are those investments in components and services that are involved in the mass production and launch of new devices. These line items include component purchases, manufacturing process equipment investments, advertising, and other services. Huberty notes that Apple's total spending in these areas has climbed 46 percent yearly and 36 percent quarterly in fiscal Q3 2014, making last quarter's jump the largest spending increase since Apple first launched the iPhone in 2007. 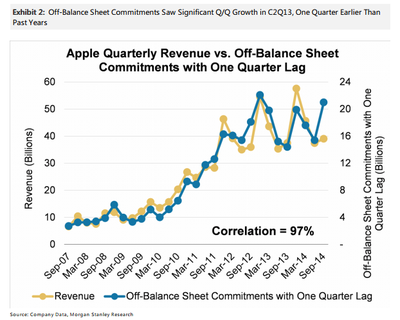 Huberty, not surprisingly, attributes this spending increase to Apple's iPhone 6 and iWatch wearable, both of which are expected to launch later this year. These new products, along with services such as mobile payments, could accelerate growth and boost margins.

Apple has the opportunity to take share in slower growth smartphone and tablet markets with larger screens and new services. New product categories like iWatch, and services like payments could further boost growth.

Apple is rumored to be launching its next-generation iPhone 6, refreshed iPad models and a new iWatch smartwatch later this year. The company may also update its Mac hardware to coincide with the debut of OS X Yosemite.

ggibson913
I am a much bigger fan of the old Apple staggered releases. IPad in March, iPhone in June, etc. . Not a fan of the dump in the fourth quarter.
Score: 18 Votes (Like | Disagree)

Really excited about the iTime.


If it's called iTime, it's iTime to hire someone new in the naming dept.
Score: 16 Votes (Like | Disagree)

Alphabetize
I miss the days of product announcements every few months or so!
Score: 7 Votes (Like | Disagree)

Jesus, what is wrong with all of these "analysts"? Too dumb to be real journalists? That bad at math and physics so engineering is out of the question?

I mean, isn't a 600 billion $ valuation and the title of most value public traded company and 8 billion $ on a slow quarter good enough?

It's so boring... All of those attempts to manipulate the stock price. Apple is fine. In fact, they are better than everybody else in the tech industry. Why focus on trying to bring them down instead of focussing on making lesser companies like Samsung Electronics, Asus, Lenovo, LG, HTC, etc. up their respective games?

Jesus, what is wrong with all of these "analysts"? Too dumb to be real journalists? That bad at math and physics so engineering is out of the question?

I mean, isn't a 600 billion $ valuation and the title of most value public traded company and 8 billion $ on a slow quarter good enough?

It's so boring... All of those attempts to manipulate the stock price. Apple is fine. In fact, they are better than everybody else in the tech industry. Why focus on trying to bring them down instead of focussing on making lesser companies like Samsung Electronics, Asus, Lenovo, LG, HTC, etc. up their respective games?


Just one small point, an 'analyst' is not a 'journalist'. An analyst's job is to take information from both the public sector and possibily other 'sources' (such as supply chain manufacturers) and try to predict growth or lack of growth in a company the point being to aid investors. An analyst makes their money on just how accurate their predictions are. Some are very good, because they study past actions as a way to predict the future or because they have 'other sources' where they get some inside information. Good analysts are very much in demand. They can try to manipulate stock prices but unless they are really good and have a great track record it's not really possible. Different investors listen to different analysts.

A journalist's job is to report news, period. Don't confuse the two.

As for the rest of your post, I don't get what you're trying to say. This is simply information and an observation by one analyst. Some people might use it to invest, some might use it to divest but a good investor will do more homework and make up their own mind.

bushido
dont care about the watch, gimme a new apple tv or at least a new interface
Score: 5 Votes (Like | Disagree)
Read All Comments