Apple’s iPad Air outperforms competing tablets by a significant margin when it comes to battery life, according to a new test conducted by Which? Test Lab, a consumer test organization in the United Kingdom.

In a battery usage test that covered both Internet and video use, the iPad Air bested both the iPad 2 and the Retina iPad Mini, as well as tablets from competing companies like Amazon, Google, and Samsung.

In the video test, the iPad Air lasted quite a bit longer than its competitors at 777 minutes (almost 13 hours). The Kindle Fire HDX 8.9 and the Nexus 7 from Google came in second and third, at 714 minutes and 669 minutes, respectively. The Retina iPad mini and the iPad 2 fared decently at 660 and 604 minutes, respectively, while the Samsung Galaxy Note 10.1 came in dead last with 465 minutes of battery life (7.75 hours).

For the tests, Which? set all of the tablets at a brightness of 200 nits (what it calls a reasonable daytime brightness level) and checked battery life while web browsing over wi-fi (with 3G enabled) and during video playback. The tests may not be entirely reflective of real world usage given variations in browsing and video watching habits, but the experiment does give a clear overall view of the battery life of the iPad Air compared to its competitors. 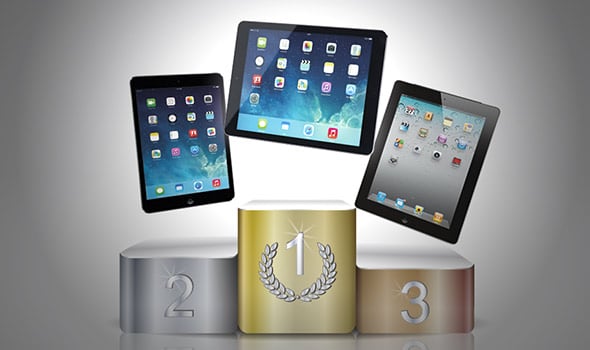 No more words are needed.
Score: 4 Votes (Like | Disagree)

Tankmaze
Its the only tablet to buy. Enough said.
Score: 4 Votes (Like | Disagree)

Almost all of those compared are 7 inch tablets or so?

Highly unfair (fanboy?) test. A 10" tablet versus 7-8 mostly tablets. Should've been iPad mini retina for this, and the Air versus 10" android/windows tablets.

In case you two didn't notice, the iPad Mini, and other 10" and 9" inch tablets also figured in those charts.
Score: 3 Votes (Like | Disagree)

And if it was the ipad mini versus 7-8 tablets it also wouldn't take the top prize..


Really? Do you seriously believe that? iOS7 is freakishly optimized like you wouldn't believe while android is freakishly unoptimized.

On another note, I do like we browsing on my mini retina and I only need to charge it once a month.
Score: 2 Votes (Like | Disagree)

newagemac
The performance optimization in iOS7 is nuts! This really just shows how far ahead iOS7 is past Android when you compare similar sized devices. It will be interesting to see the battery life of the iPhone once they go with the larger size allowing a similar sized battery as its Android counterparts.

Also looking forward to seeing what iOS7 can do for battery life in something like a watch. Interesting times ahead that's for sure.
Score: 2 Votes (Like | Disagree)

MikeAnd
If you can't afford an iPad...

...go with a Tesco Hudl. Obviously.
Score: 2 Votes (Like | Disagree)
Read All Comments