Plants vs. Zombies 2 utilizes the same lane defense gameplay that made the original game a hit, but it also offers up some new plants, new gameplay mechanics, and time travel to settings like ancient Egypt. With 16 million downloads, it represents EA's most successful mobile game launch to date.


During EA's Gamescom press conference this morning (via Joystiq), franchise director Tony Leamer also announced an upcoming content pack for the game, called "Far Future." There are no further details about the content pack at this time, so it is unclear when it might be released.

Though Plants vs. Zombies 2 is a freemium game, much of the content is available without paying. Our sister site TouchArcade has released a guide on how to spend as little money as possible (which actually shows that gamers can play through the entire game without spending any money) and has also published a detailed review of the game that calls it an "incredible sequel."

Plants vs. Zombies 2 is a universal app that can be downloaded from the App Store for free. [Direct Link]

riptide747
Actually having almost beaten the game I can tell you your statement is completely false. It never asks you to buy anything, it only informs you of purchases you CAN make IF you want different plants. You can beat the entire game without buying any additional plants.
Score: 5 Votes (Like | Disagree)

musicpenguy
This is fairly sad - the masses are putting up with In App Purchases and the freemium model.

I would rather EA put out a $50 game on iOS that includes everything than feel like I'm in a kid approved casino :(

I'll be sticking with my Nintendo 3DS XL for all of my portable gaming, where gaming is still fun and doesn't nag you every 5 minutes to spend more money on a game you already installed.
Score: 5 Votes (Like | Disagree)

Brittany246
I'm on the 3rd world, I haven't spent a dime, and I rarely use the coins I earn. I don't mind IAP when they're power ups and coins because I never buy them anyway. If I'm struggling, I eventually get past the level. It takes time... but at least I don't feel like I cheated my way through it.
Score: 3 Votes (Like | Disagree)

Actually having almost beaten the game I can tell you your statement is completely false. It never asks you to buy anything, it only informs you of purchases you CAN make IF you want different plants. You can beat the entire game without buying any additional plants. 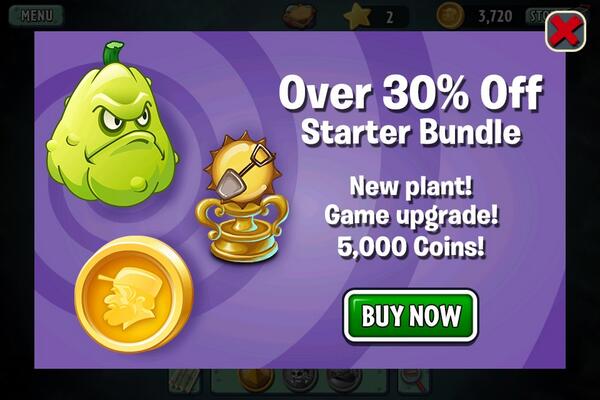 ufwa
My own experience and from other reviewers, there is no need to pay for anything.

Which is a complete shocker given that this is EA after all. Who nickel and dime you any chance they get.

The hints/tips/guide whatever you want to call it is merely to save you money as the normal free stuff nets has the same effect as the paid stuff.

Yes the game is repetitive. It has been that way since the original PC version.
Score: 2 Votes (Like | Disagree)

Is anyone else finding this game almost impossible to beat without using in app purchases? It's just too difficult

I'm not that far into the game but if to move forward you need to start buying inhouse purchase then the delete button will be hit.