Blizzard Announces 'Hearthstone: Heroes of Warcraft' for Mac and iPad 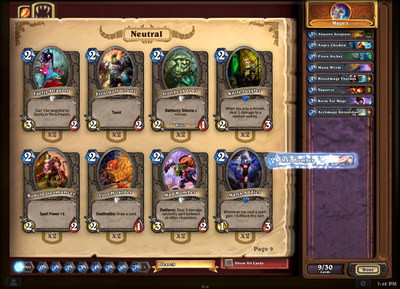 Blizzard today announced Hearthstone: Heroes of Warcraft, a new free-to-play collectible card game set in the Warcraft universe. In a first for Blizzard, it will be available on the iPad in addition to the Mac and PC. It appears that players will be able to play multiplayer games across platforms.

Set in the World of Warcraft universe, each Hearthstone deck will revolve around heroes of nine of the MMO's classes. At least 300 cards will be available at launch, and you'll be able to earn or buy packs. Also, you'll be able to put together your own decks and be able to "disenchant" duplicates and craft better, presumably original cards from them.

The competitive side of the game will feature one-on-one fights via Battle.Net, which, if you didn't know, is the service Blizzard uses for its PC games. We're not sure what the iPad version will use -- details are still coming out from the event.

Hearthstone is due out later in 2013, with the iPad version coming after the initial PC and Mac release. Users can register for the beta on Blizzard's website.

Blizzard rarely makes crap so I am interested by default.


Panda land and Diablo 3. Their track record isn't that great of late...
Score: 4 Votes (Like | Disagree)

Nightarchaon
so, after the failure of the real money auction house experiment in Diablo 3 , the quest for a revenue model to replace World of Warcraft when the last few people still playing die of shame (im pretty sure only 8 people play now, but each has a million accounts)

So now this looks like Blizzards 1st attempt at the EA, "lets screw everyone over on micro transactions" Real Racing 3 method of gaining revenue.

Free Starter pack will be useless against anyone who has spent money on expansion decks, and the expansions you buy will be made useless every other week by new decks being released so you have to keep buying new decks if you want to actually win.
Score: 3 Votes (Like | Disagree)

Dolorian
I used to love Blizzard, own all their games up to Warcraft III but after Diablo III and it's requieriment to always be online to play (and their constant server crashes which prevented me to play even while connected) I just gave up. I also was planning to buy Starcraft II but got dicouraged with the whole thing about different regions.