iFixit has already performed one of its traditional high-quality teardowns on the new 13-inch Retina MacBook Pro, noting that while those looking to repair their machines face many of the same challenges seen with the 15-inch model, there are a few changes that improve accessibility somewhat.

One of the most interesting changes relative to the larger model is a battery layout that leaves the area underneath the trackpad free of battery cells. In place of battery cells in that location, Apple has elected to mount the 13-inch model's flash storage, a move that allows access to the trackpad for replacement if necessary. 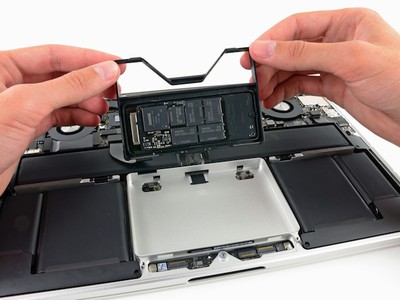 Another one of iFixit's major criticisms of the 15-inch Retina MacBook Pro design was the glued-in battery cells that were found to be extremely difficult and time-consuming to remove without puncturing the cells. In the new 13-inch model, two of the six battery cells are housed in a metal tray that includes no adhesive, while the remaining four cells still required roughly 15 minutes of work to pry loose from the case.

The teardown of the 13-inch model otherwise yields few surprises compared to the larger 15-inch model, and the similar challenges of soldered RAM, proprietary screws, integrated display, and glued-in battery have led iFixit to award the 13-inch model a repairability score of 2 out of 10, one point higher than the 15-inch model.

… have led iFixit to award the 13-inch model a repairability score of 2 out of 10, one point higher than the 15-inch model.

*Than the 15-Inch Retina MacBook Pro
Score: 46 Votes (Like | Disagree)

needfx
Get rMBP - check
Tear it down - check
Put it back together - pending
Score: 26 Votes (Like | Disagree)

KikoPT
I still find amazing that ...

I still find amazing that you can not customize a 16GB RAM option on this thing ...

Even on the 15" rMBP i don't find any store selling a 16GB option (besides apple online store, of course).
Score: 10 Votes (Like | Disagree)

I still find amazing that you can not customize a 16GB RAM option on this thing ...

Even on the 15" rMBP i don't find any store selling a 16GB option (besides apple online store, of course).


That's because Apple has soldered the RAM on to make it impossible to upgrade yourself, they wan't you to throw away your Macbook and buy a new one when you need better performance.
Score: 9 Votes (Like | Disagree)
Read All Comments