Another Likely Physical Mockup of Next iPhone Offers a Realistic Look

Gizmodo points to a newly-discovered product page from case manufacturer Shenzhen Coolzone Technology displaying what appears to be a high-quality physical mockup matching up with rumors and leaked parts for the next-generation "iPhone 5". 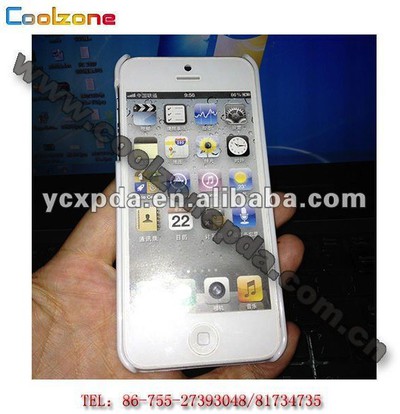 Case manufacturers have become increasingly sophisticated with their physical mockups created for design and testing of new cases, giving their mockups very realistic appearances that have led to uncertainty about whether they are genuine devices or not. While the device shown in the photos certainly does look realistic in many regards, the low-quality photos leave many details unclear and we indeed believe the item to be a physical mockup rather than a leaked genuine iPhone.

Regardless, the photo provides a reasonable glimpse of what the next iPhone may look like, albeit with iOS 5 rather than the iOS 6 that the device will undoubtedly ship with later this year.

Update, August 2: Neowin has posted photos of an identical mockup, confirming that it is a "non functional replica prototype".

EDIT: There's no way that's a realistic look at the next iPhone. For one thing, I expect the bezel at the top and bottom of the phone to be much thinner to accommodate a larger screen and make the phone look more slick.

And, as other people have pointed out, there's no way apple uses phillips head screws at the bottom.

Then there are the rough edges, no metal around the bezels...

moabal
For some reason I am still not 100% sold on a longer iPhone. I would rather it stay the current size than it getting awkward long. Or at least if they want to make it bigger, they make the entire device proportionally bigger.
Score: 22 Votes (Like | Disagree)

Another Likely Physical Mockup of Next iPhone Offers a Realistic Look


Sheesh. How ambiguous can you get? "Possible Physical or Imaginary Mockup of Purported Next Generation iPhone Offers Another Interpretation of Rumored Appearance."

Chupa Chupa
You know it would be hella amusing if Apple punked all these case makers once again. I guess we'll find out in a month or so.
Score: 18 Votes (Like | Disagree)

Gizmodo points to a newly-discovered product page from case manufacturer Shenzhen Coolzone Technology displaying what appears to be a high-quality physical mockup matching up with rumors and leaked parts for the next-generation "iPhone 5".

Too chunky, even on a prototype Apple would never use visible screws! a mockup maybe, but probably miles off what they have planned.


Have you looked at the bottom of your iPhone 4/4S lately?
Score: 13 Votes (Like | Disagree)
Read All Comments

Tuesday June 2, 2020 1:31 am PDT by Tim Hardwick
Apple Music has cancelled its Beats 1 radio schedule for Blackout Tuesday and is suggesting that listeners tune in to a radio stream celebrating the best in black music. Blackout Tuesday is a campaign organized by the music industry to support Black Lives Matter after Minneapolis citizen George Floyd was killed by police in the course of his arrest. On launching Apple Music, many users...
Read Full Article • 434 comments