Following an audit of Foxconn's facilities where the company assembles Apple products, the Fair Labor Association (FLA) today announced that it has reached an agreement with Foxconn that will result in stricter controls over working hours and an examination of salaries paid to workers at the facilities.

Foxconn has committed to bring its factories into full compliance with Chinese legal limits and FLA standards on working hours by July 2013, according to its remediation plan in FLA's report. The supplier will bring working hours in line with the legal limit of 49 hours per week, including overtime. This means a reduction in monthly overtime hours from 80 to 36, and would be a significant improvement given that most of the technology sector is struggling to address excessive overtime.

More importantly, while employees will work fewer hours, Foxconn has agreed to develop a compensation package that protects workers from losing income due to reduced overtime. In order to maintain capacity while reducing workers' hours, Foxconn committed to increase its workforce significantly as it builds additional housing and canteen capacity.

During its audits, the Fair Labor Association found numerous violations of both Chinese labor laws and FLA standards when it comes to working hours, with average workload coming in at over 60 hours per week during peak times. Instances of unfair overtime pay were also uncovered, with overtime payments only being made in 30-minute increments. Consequently, workers received no pay for overtime work of up to 29 minutes, while workers putting in 30-59 minutes of work received pay for only 30 minutes' worth of work.

The FLA found several other issues in its audits, ranging from health and safety to lack of worker union representation. Full details on the results of the FLA's audits are available through the organization's website. The FLA will continue to monitor Apple's and Foxconn's efforts at compliance, and will post follow-up reports on its investigations.

While this is good, don't be surprised (or complain) when the price of your Apple gear starts to go up! Something has to give.

$500 for an ipad and the foxconn employees MAKE LESS THAN $1 PER HOUR.


What does iPad cost and less than $1 /hr have to do with anything? Apple don't own Foxconn, Foxconn is a supplier to ALL the electronic companies. Have they all agree to raise they hr wage to Chinese workers too? or should this be just Apple issue?

The cost of living is different in China than the US. etc.. etc.. read and understand how the world really is, Foxconn have hundreds and thousands of workers standing inline applying for job at each job fair, if you think these better options elsewhere, please advice.
Score: 6 Votes (Like | Disagree)

This means a reduction in monthly overtime hours from 80 to 36, and would be a significant improvement given that most of the technology sector is struggling to address excessive overtime.


Seems to me like we could agree that mandatory (or compulsory) overtime is an evil... but what about voluntary overtime?

If you really want to work 80 hours a week because you want / need the extra money... are we really doing you a favor saying you can't?

What's important is that you can't be fired or otherwise passed over due to NOT working overtime... But overtime (even lots of it) seems to be a personal value (or not)...
Score: 6 Votes (Like | Disagree)

FFArchitect
Is there documentation/attention to this issue for other companies? (Sony, Samsung, etc)
Score: 6 Votes (Like | Disagree)

The confluence of the report, Apple's response, and trends in China itself means that they will need to hire 20% more employees to conform to the per worker hourly reduction pledge. Wage prices in China reliably go up 15% per year and the Chinese Rimimbi currency is all but locked against the dollar.

Now this does have the offset of paying less overtime by about 10-15%.

But overall we should see a labor component cost increase of about 15% per year with it being a bit front loaded as compliance ramps.

The single easiest way to have things cost us less is to borrow and spend less at the Federal government level. It is causing currency destruction at a rate of about 7% a year reliably under the Obama Presidency. We currently deficit spend at the shocking rate of about $250B a MONTH and we were promised stimulus would be one time and about $866B with a then ANNUAL deficit of about $450B.

The TARP, Fed actions, and such are large in scale to the tune of about $7T, about the same scale as the liquidity lost when home prices vaporized $7.5T in about a year and a half. The Fed has "sterilized" those actions, but they are real, have to be unwound some day and there are hard costs to real people to keeping interest rates ridiculously low. Also most of TARP and bank liquidity has been paid back with over $100B in net profit paid into the treasury already.

All of that stuff together makes it cost us more for gasoline (30% since Obama's budget was passed on currency destruction alone, no issues from oil speculation or Iran included in that), food, commodities, and payments to China.

In the CNBC interview the FLA President characterized the forward leaning of Apple and Foxconn on labor issues in China as likely to lead to a "race to the top". For those of us critical of Chinese policies of various types, this is only good. It is also having direct impact on large parts of Chinese society.

So I call it a mixed picture but far more good than bad, and slightly bad for forward earnings of AAPL.


Rocketman? Your comments are usually so insightful and well targeted, I don't understand the hysterical incoherent rant...

I'm not sure what you mean by "currency destruction"-- the only links I can find to it are either the physical destruction of used bills, or Ron Paul nonsense... If what you mean is inflation: 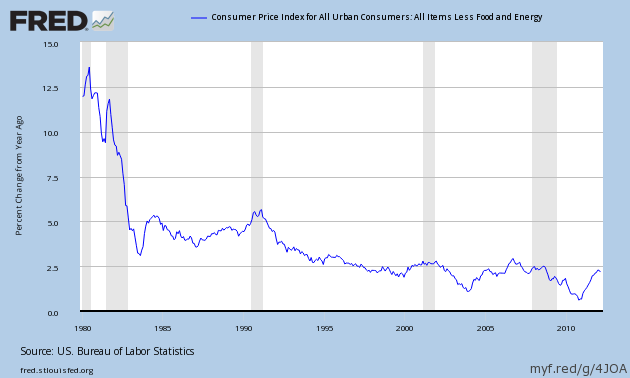 If you mean the dollar exchange rate: 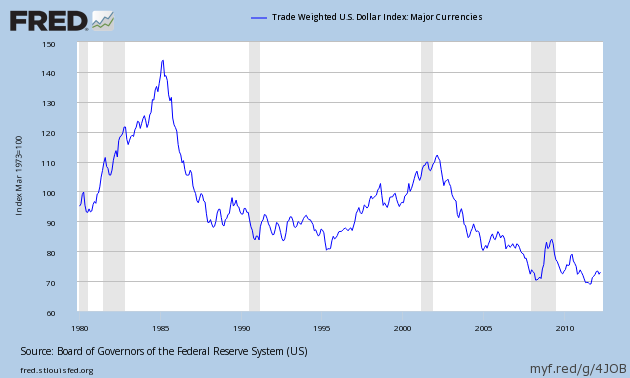 We haven't really moved from where Bush left us, and frankly I think the dollar is still too strong. You can argue in favor of cheaper prices, but we're not going to get the trade deficit under control, or boost demand for US products, until the dollar falls against foreign currencies, particularly the renminbi.

You can complain about deficits, but the deficit has fallen every quarter since Obama took office, and we're already back to less than the average Reagan deficit which is remarkable given the magnitude of the hit to revenues: 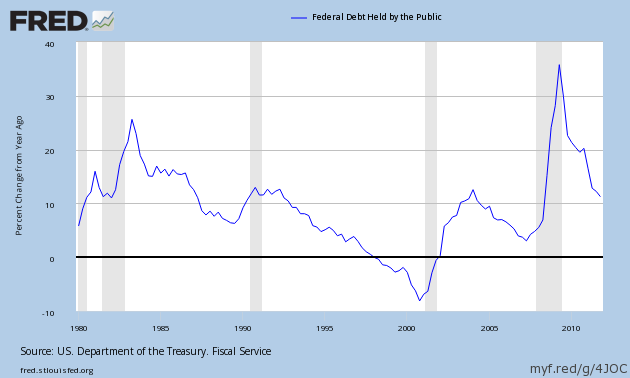 Low interest rates are a net benefit to anyone carrying a mortgage or invested in the stock markets and only really a bummer to people heavily invested in treasury bonds-- mostly big investment houses. To say there are hard costs to real people in keeping interest rates low is suggesting that real people are forced to invest in treasury bonds and the Fed is punishing them. The whole point of low interest rates is to discourage people from lending their money to the government and encourage them to invest it in the broader economy-- if people are insisting on holding treasuries, they either masochists, or don't see it as a hard cost. 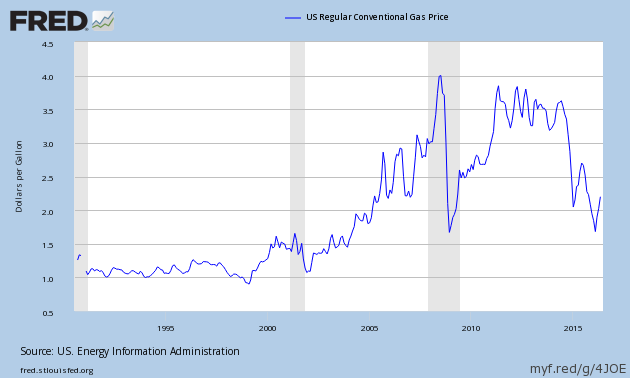 They took a dive when we thought the world was ending, and now they're still below the Bush peak in nominal non-inflation adjusted dollars, not to mention real dollars or previous trend: 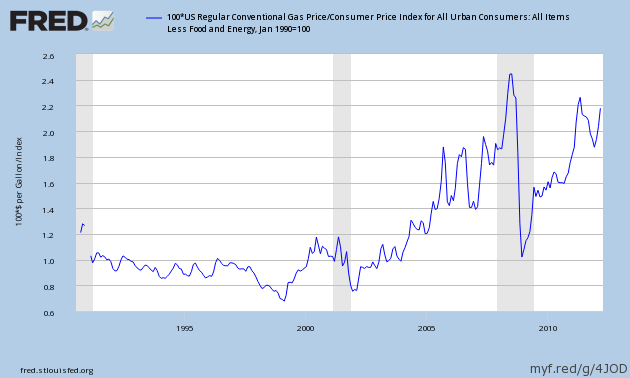 And frankly, if you look at the inflection points the rise in prices has much more to do with this (more negative is more imports):

than "currency destruction" or whatever you're blaming the government for.
Score: 5 Votes (Like | Disagree)
Read All Comments