Macgasm notes an interesting tweet by former Apple TV engineer Michael Margolis who claims that the new Apple TV interface designs were "tossed out 5 years ago because [Steve Jobs] didn't like them." 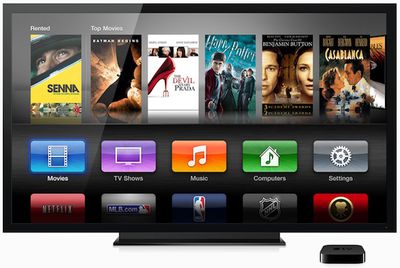 Alongside the 3rd Generation iPad, Apple also introduced a new version of the Apple TV that supports 1080P video. With it came an updated interface for the set-top box, (shown above) with icon-based category buttons and large billboard-style artwork for content. The interface was also rolled out to previous 2nd Generation Apple TV owners in a software update.

Margolis goes on to say that "now there is nobody to say 'no' to bad design", referring to Steve Jobs' passing. Some MacRumors readers have complained about the new design, and others felt it was a paving the way for Apple TV apps in the future.

Five years ago (2007), when the design was reportedly "tossed out", Apple's product landscape was quite different. Both the Apple TV and iPhone were first introduced in January of that year, and the App Store would not be launched for another year in mid-2008.

Update: Margolis clarifies what he meant to TheNextWeb:

The new UI shouldn’t come as a surprise to anyone. There is a clear effort at Apple to make everything match the look and feel of their popular iOS products – starting with Lion and increasing momentum with Mountain Lion.

To be clear – he didn’t like the original grid. This was before the iPhone was popular and before the iPad even existed.

Given that the iPad is far more successful than the AppleTV, migrating the AppleTV to look more like the iPad was probably a very smart move – even if some of the users of the old UI don’t prefer the new one.

Update 2: TechCrunch posts a longer response from Margolis who seems to be downplaying his previous tweet:

Steve rejecting a design five years ago isn’t a huge deal. Steve was well known for rejecting ideas, tweaking them, and turning them into something even better. And that’s a very good thing. One of my favorite parts of working at Apple was knowing that SJ said “no” to most everything initially, even if he later came to like it, advocate for it, and eventually proudly present it on stage. This helped the company stay focused and drove people to constantly improve, iterate, and turn the proverbial knob to 11 on everything.

URFloorMatt
Apple has 60,000 employees, and Steve was the only person qualified to say "no" to bad design? Give me a break.
Score: 63 Votes (Like | Disagree)

zweigand
"now there is nobody to say 'no' to bad design"

Uh, yeah there is. They are called consumers.
Score: 45 Votes (Like | Disagree)

Big-TDI-Guy
I still miss the Tiger-Era Front Row interface. That was wonderful, still miss it today!
Score: 39 Votes (Like | Disagree)

Apple has 60,000 employees, and Steve was the only person qualified to say "no" to bad design? Give me a break.

Steve did not run a democracy, his obsessive nature is what made Apple the company it is today. Just read all the confessions / biographic memos, he sounded like a scary individual.
Score: 35 Votes (Like | Disagree)

dagamer34
Only reason they went with this design is that it scales better with multiple apps than the old software ever did.
Score: 30 Votes (Like | Disagree)

IMHO it's kind of annoying to have to scroll up and down/remember where stuff is. At least with the menu system I knew Netflix/radio/youtube were all "Internet" related things under the Internet menu.

With one quick scroll you can see every single content option on the device represented by big, colorful icons. I don't see how this makes it more difficult than the old software.

This looks like the end of Apple. Without Steve here there is no QA.

Right, because no one ever complained about the old Apple TV interface that Steve did approve. Not that we even know whether Steve saw and approved this design the second time around.
Score: 28 Votes (Like | Disagree)
Read All Comments

Thursday September 29, 2022 12:38 pm PDT by Juli Clover
Tony Blevins, Apple's vice president of procurement, is set to depart the company after he made a crude comment about his profession in a recent TikTok video, reports Bloomberg. Blevins was in a video by TikTok creator Daniel Mac, who was doing a series on the jobs of people he spotted with expensive cars. After seeing Blevins in an expensive Mercedes-Benz SLR McLaren, Mac asked Blevins what ...
Read Full Article • 387 comments